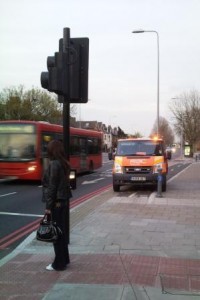 RAC to the rescue

To coincide with the new cycle facilities installed by TfL around Richmond Circus on the A316, the RAC has launched a new cycle rescue service.

Either that, or they are just blocking the cycle lane on the A316 with no regard for cyclists and pedestrians.

Now that the facilities have been completed, RCC plan to carry out a review to feedback to TfL.  Feel free to pass on any comments by email (campaign@richmondlcc.co.uk) .

In general, TfL have done a good job creating facilities to allow cyclists around Richmond Circus, including filling in a few gaps. This is particularly important for young cyclists, those cycling with families, or those less confident, for whom a facility like Richmond Circus can act as a major barrier.

It is also good that in general, the works have not been at the expense of cyclists who are more confident/experienced and are happy to go around the roundabout on the road.

There are a few areas of concern through, for example, the linkage between Richmond Circus and Richmond station is still poor, and the exit from London Scottish Rugby club is being used as a rat run by cars leaving Pools on the Park. Also, signage could be improved.  This will all be fed back to TfL and Richmond Council.