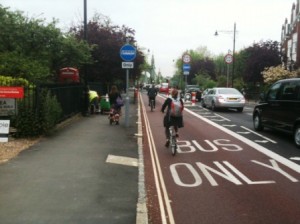 There is still no movement in improving this crossing to make it safer for cyclists and pedestrians alike – with cyclists still expected to hop onto a very narrow shared use footpath, which itself is often strewn with road works. The barriers themselves are often broken, with a number of bus drivers having been caught on CCTV removing them when they haven’t opened.
Local cyclist, Mathieu Davy, has shot an excellent video which illustrates the problem very well. We continue to raise this issue with the local authorities and will keep you updated of any progress.

In addition to the review of the London Road Roundabout on the A316, we’ve also had a local cyclist carry out an audit of Hammersmith Bridge, in particular the new bus lane barriers and the diversion of cyclists onto a shared footpath, installed earlier this year. The audit also incorporates feedback from other cyclists who’ve told us about intimidation on the bridge.

Hammersmith Bridge is a key transport route, being part of the London Cycle Network. A survey in 2008 showed that in the morning peak hour,  a third of the total northbound traffic were cyclists.

Hammersmith and Fulham council were responsible for the recent works and the council believe the current layout is ok and no further improvement is justified. Hammersmith and Fulham Cyclists have launched a survey to obtain feedback from cyclists as to whether this is actually the case. You can fill it out by clicking on the link below, the deadline is Friday 12 November. We shall also be providing a copy of our audit as input.

Again, if there are areas in the Borough you’d like improved,  please let us know. We’ve created a template which you can easily edit and add your own photos to.  This can be a junction you find particularly dangerous, a dangerous cycle lane, a break in a cycle route, a pinch point on the road or anything that causes concern. We rely on you, the cyclists of Richmond, our veloteers, to be our extra sets of eyes and ears on the ground to pick these issues up.

Or, if you’d prefer, send the photos to us at campaign@richmondlcc.co.uk along with a description of the problem.

We’ll continue to post the audits on this site and raise it in our meetings with Richmond Council and TfL. These audits and pictures are extremely valuable in getting the message across.

One thought on “Another ‘Veloteer’ Review – Hammersmith Bridge”