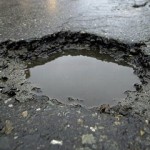 Richmond and Twickenham Times reports the setting up of a competition for the design of the proposed Manor Road footbridge.  Apparently Network Rail and Richmond Park MP Zac Goldsmith will agree a shortlist for residents to vote on.

The Design Council launched the Cycle Theft Challenge on 20th January to develop secure, affordable and easy to use bike storage for locations around the home.   The competition brief draws on findings of a Bikeoff survey showing more than two thirds of bikes are stolen from in, or around, the owner’s home. Four successful teams will be awarded £10,000 each to develop their ideas. Designers need to submit a short proposal by 2 February with successful teams developing their ideas during March.

The Sunday Times Ingear supplement covered the problem, “at a record high”, and it’s good to see a household name like Victoria Pendleton supporting a CTC campaign that’s been running for a while.  A key message for cyclists is that drivers instinctively swerve away from oncoming traffic and towards the kerb.  Roger Geffen, CTC Campaigns and Policy Director  is also quoted as saying “We always advise cyclists not to hug the kerb, but when there are potholes around, that advice is even more important.  Cyclists need to be able to swerve inwards, to avoid a pothole, rather than into the traffic, and you can’t do that if you are already close to the kerb.”  At the next meeting of the CLG Monday 31st I’ll ask about the scale of the pothole problem in Richmond, remedial plans, projected cost and where the money comes from.  Tell Richmond Council about your potholes .

E-mail your comments to campaign@richmondlcc.co.uk