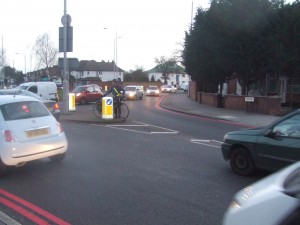 It took time but we have a written response from Transport for London following the site meeting on 15th July.

2 documents stand out from the 18 sent:

1. 2008 report on the feasibility of replacing the roundabout with a traffic light controlled junction [conclusion: it’s not, p17-18]

2. TfL reply to the series of questions we asked both in writing and in person at the site visit.

Dr Vince CABLE, MP for Twickenham, Teddington, Whitton & The Hamptons, told TfL on 14th July he was familiar with the report but wrote:

“I have received a number of emails…about the [London Road] roundabout and the omission of a crossing from TfL’s latest plans.  My understanding is that in the original scheme there were plans for a signal controlled crossing across the northern arm of London Rd when it was concluded that full roundabout signalling could not be done.  This also included closure of the Cole Park Rd/Chertsey Rd northern entrance.  It is not clear to me why it is now being said that such a crossing would not be feasible. If you have visited the roundabout yourself, then you will know that it can be virtually impossible at times to cross the road because of the heavy flow of traffic and its speed.  Enlarging traffic islands will still mean people have to take their chances and cyclists will still have to run across the road with their bikes to and from the cycle lanes. The only solution to make this roundabout safe is a crossing and I hope TfL will now revert to the earlier proposal.”

“TfL investigated the signalisation of the roundabout in earlier work undertaken between 2006 and 2008.  We concluded that provision of signals on each arm would reduce the overall capacity of the junction to accommodate traffic flow, resulting in increased queuing and displacement of traffic to adjacent parts of the network (potentially to residential side roads).  A further option that has been investigated but which was not feasible on cost grounds was to convert the roundabout to a signalised crossroads.  There is a large gas main in the centre of the junction, and TfL would need to pay for it to be moved in order to accommodate a crossroads.  This has an estimated cost of £870,000, in addition to the costs of other civil engineering and design.  The total cost could not be justified in relation to user benefit.  The provision of a stand-alone ‘Toucan’ crossing sited away from the junction cannot be provided due to several vehicle accesses for adjacent properties, and it is the Mayor’s policy to limit the number of traffic signals in London, given their operational and maintenance costs, in addition to their impact on capacity.  Whilst we recognise that some respondents would prefer an alternative scheme, we frequently need to balance competing demands from road users and carefully prioritise available resources.  The response to our recent consultation on the scheme was largely positive and for this reason we will progress it.

We are however investigating as a separate scheme a proposal to close the northern entrance to Cole Park Road and relocate the existing Toucan crossing to the east of the roundabout.  This has the potential benefit of achieving a cycle crossing closer to existing desire lines, increasing the exit capacity of the roundabout through providing additional queuing space and reducing rat-running traffic on Cole Park Road, which is primarily residential.  We do however need to carefully consider both the impact of the proposal on pedestrian desire lines at the junction and its costs.  In the event that we are able to identify a viable option, we will proceed to undertake public consultation on this proposal before determining a way forward.  Work is still at an early concept stage, and we are working closely with the London Borough of Richmond during the design process.”

Key statements are repeated in TfL’s response on 18th August:

“…signalisation of the roundabout would have caused severe delays.”

“…the presence of several dropped kerb accesses nearby mean that we are not able to provide stand-alone toucan crossings in locations that are close to the pedestrian and cyclist desire lines.”

“…the current Mayoral policy is that there should be no net growth of traffic signals on the network.”

“…St Margaret’s roundabout was signalised in 1995 prior to TfL’s formation, the introduction of the 2004 Traffic Management Act and current Mayoral policy to limit the growth of signals in London.” [i.e. we wouldn’t do it now]

So, what’s the evidence to support the statements:

Nothing specific to London Road but we’ve been given the Traffic Modelling Guidelines and Model Auditing Process MAP so we’ll read through them to see if they answer questions like:

Dr Vince CABLE for writing to TfL  [Read more about his views on cycling in Twickenham in his recent column in Richmond Informer although we’d ask what “well appointed safe cycle routes” there are in the Borough];

Caroline PIDGEON, Leader of the Liberal Democrat Group and Chair of the Transport Committee, London Assembly, for her persistence in asking about the roundabout at Mayor’s Question Time;

Radio Jackie for giving us air-time at the beginning of July.

Last, but certainly not least, Tim Harris, who, because he cycles the route to work and knows what he’s talking about, has repeatedly challenged TfL: a true veloteer.

More to follow on other parts of the A316 cycle route.