Nothing new in the Mayor’s answers to these cycling questions, except being told work won’t begin until after the Olympics: no surprise there but maybe an opportunity to seek another review after the Mayoral Elections on 3rd May?

Will you look again at the past recommendations for light controlled crossings on the A316 cycle route at London Roundabout?  A constituent informs me that the recent changes by Transport for London to help cater for pedestrians and cyclists travelling east/west along Chertsey Road, crossing both arms of London Road, are minimal and ineffective.

Written response from the Mayor

A feasibility report into the signalisation of London Road Roundabout was completed in 2008.  At the time it concluded that it could be technically feasible to replace the roundabout with signalised crossings, but there would be costs close to £1m to divert the statutory undertakers’ equipment within the roundabout.  The cost benefit ratio of these changes is therefore deemed to be too high.  TfL is currently progressing an option to provide refuge islands for pedestrians and cyclists on the northern and southern arms of the roundabout.  These will alert motorists to the presence of crossing pedestrians and cyclists and will provide a safe waiting space to cross in two phases.  It is anticipated that these works will be constructed after the Olympics.

Will you make public Transport for London’s data for the predicted use of the London Road roundabout on the A316 and the judgement criteria that they used to decide that providing a continuous cycle route via a signalised crossroads at London Road/A316 would result in increased queuing and displacement of traffic?

Written response from the Mayor

Officers are drafting a response which will be sent shortly.

Yes, and we’re looking forward to reading it.

Looks like time spent cycling with Jenny Jones back  in September wasn’t wasted.  Apparently she will be asking these questions about London Road at the January session of Mayor’s Question Time.  Thanks to Tim Harris, one of our A316 Veloteers.

Will you look again at the past recommendations for light controlled crossings on the A316 cycle route at London Road Roundabout?  The recent changes by Transport for London to help cater for pedestrians and cyclists travelling east/west along Chertsey Road, crossing both arms of London Road are minimal and ineffective.  Are you worried that following the fatal mistakes made at Bow Roundabout you appear to be more concerned about saving driver’s time, rather than saving lives?

Will you instruct transport for London to make public the primary or predicted data and judgement criteria that they used to decide that providing a continuous cycle route via a signalised cross roads at London Road/A316 would result in increased queuing and displacement of traffic?

“TfL is currently investigating the closure to vehicular traffic of the northern arm of Cole Park Road.  We do however intend to maintain provision and improve priority for cyclists through Cole Park Road.  This is separate to the A316/A310 London Road Roundabout project that we have discussed with previously.

The lengthy conversation we had with TfL this year about London Road roundabout at least gave us the opportunity to ask them about other significant breaks in continuity [places where you’re told to get off your bike] along what we think is a really important route through the Borough: the closest we get, may ever get, to a Cycle Superhighway.  We e-mailed them on 4th July and we’re pleased to say we received a reply, on 11th October.

This is a long-standing problem with a recent collision between a car emerging from the car park and a mother and child on the cycle lane. We understand TfL know about this problem and again please can we speak to a named person about what is happening? 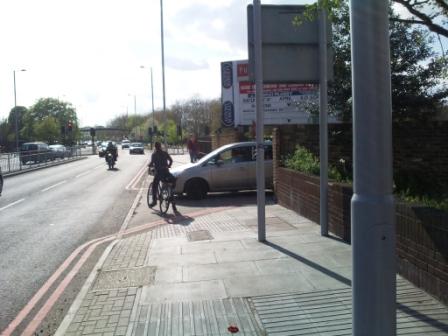 TfL are negotiating with the Richmond Athletic Association to reduce this problem.  We will be improving the signage on the exit to the ground and providing traffic calming measures within the car park.  We anticipate this will reduce the speed and the amount of vehicles using the car park as a short cut to avoid the lights.  We are also discussing the possibility of replacing sections of the wall with railings to improve visibility.  However, any decision on this would be subject to agreement from the Crown Estate and the Richmond Athletic Association who are the landholders.  We also intend to resurface the exit to the car park to alert pedestrians and cyclists to the presence of a vehicular access.

[Note the word “However“: is this really the solution to the serious problem at the location?]

A member recently received a reply to their enquiry that included the following:

“We are currently investigating the signalisation of the A316 crossings at Manor Circus and will investigate the feasibility of improving conditions for cyclists crossing the B353 as part of this.”

Is there a timescale for this and can you assure us we will be consulted on proposed works?

Design is at an early stage, but you should note that it is the Mayor’s policy to limit the increase of signals in London in overall terms and there could be an extended design period, before TfL is in a position to consult on a proposal.  At present public consultation is scheduled for early 2013 but this may subsequently change.  I can assure you that Richmond Cycling Campaign will be included as part of consultation on proposals at this location should a viable scheme emerge from the design process.

What plans are there to remedy the current requirement for cyclists to dismount in order to cross the A205 South Circular Road?

TfL has aspirations to convert the pelican on the South side of the junction on Clifford Avenue to a larger Toucan crossing and make improvements to the footway on the South East Corner of the junction. We are planning to initiate a project at this location later in the 2011/12 financial year, commencing with feasibility investigations. We will consult with the Richmond Cycling Campaign at a point when we have a feasible design.

As an outsider TfL appears to be a huge organisation structured by theme or activity: is there also some element of geographic responsibility?  Is a structure chart available to understand how TfL is organised?

The Metropolitan Police Service Safer Neighbourhood Teams www.met.police.uk/saferneighbourhoods make it easy to know who to contact and how to contact them, is TfL able to do the same?

As I am sure you will appreciate the breadth of services offered by TfL makes it challenging to describe or demonstrate in charts and other associated materials.  There is information regarding the structure of TfL available on the website.

With regards to the practicalities of contacting TfL there are a number of ways to do this and any query whether it be email, written correspondence or phone call will be directed to the appropriate teams in customer services to respond.  With issues regarding cycling, these come under TfL Surface Transport, London Streets (for whom I work).  We then direct queries to the various teams (maintenance, planning, enforcement etc) for responses to customer queries.  If you wish to contact the London Streets team directly you can do so via londonstreets@tfl.gov.uk or 0845 305 1234.

[Note the e-mail londonstreets@tfl.gov.uk if you want to tell TfL what you think]

The A316 Cycle Route, in particular Old Deer Park and London Road roundabout, also featured during the visit of the Green Party Mayoral Candidate.  This was partly force of circumstance as we had only one hour [beginning at Richmond Station and finishing at another train station so Ms Jones could visit New Malden afterwards] and partly because we thought as an Assembly Member she should see the consequences of TfL’s current policies.  Click here for issues we highlighted on the ride.

E-mail: campaign@richmondlcc.co.uk with your thoughts and comments on the A316 Cycle Route