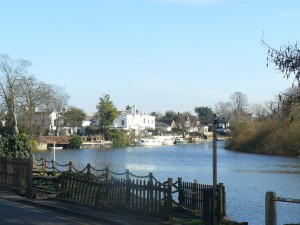 A westerly ride up the Thames to Englefield Green for lunch at the Sun Inn, then through the Great Park to Windsor and back along the Thames. About 30 miles.

That was the plan until it was pointed out that there was a Bike Events charity ride to Windsor using a lot of the same route. With the agreement of the other five riders I reversed the direction. So we cycled up the Crane and then followed the Longford River past the south edge of Heathrow to Stanwell Moor from where a rustic cycle facility took us over the M25 and so via Horton (where Milton lived)and Datchet to Windsor. The proximity of Heathrow gives a slightly grubby air to this route but there are interesting details. 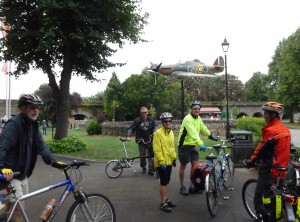 After a coffee break spent admiring a replica hurricane we located NCR4 which took us up across country to Windsor Great Park where a ride kite surveyed us hungrily  and so over to Englefield Green and lunch at the Sun Inn. 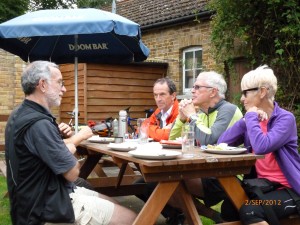 We then dropped excitingly down the A30 to Egham and crossed to Staines. We took the riverside path to Chertsey Bridge and then made our way home via Shepperton. A tad under 40 miles.