Back at the start of September, we reported about an editorial by Richard Nye in The Richmond Magazine, where he shared the view that “the only good cyclist was a dead one”. Coming on the day that 70 year old Bob Cherry was killed by a skip lorry in Walton on Thames, cycling to get his morning paper, we felt it was particularly insensitive. While no doubt made in an attempt at humour, the comments reflected much of the aggression many cyclists experience on a daily basis on the roads (you only have to look at the Twitter feed of @CycleHatred to get a glimpse of it, a subject picked up by the AA President in a speech given at a road safety conference)

At the time, the story was picked up by several online sites, including Cyclists in the City, LCC, Road.cc, BikeBiz and The Times. Several advertisers, including Moore’s Bike Shop, Sigma Sport and Action Bikes stated that they would not advertise in the magazine in the future.

Subsequently, Mr Nye posted an apology on The Richmond Magazine’s website (you can read the apology on this article by BikeBiz). Although we felt Mr Nye’s comments were extremely badly misjudged to say the least we didn’t believe there was anything to be gained from pursuing a personal vendetta against Mr Nye or the magazine. So we gave an invitation to Richard to come along to one of our rides to see some of the issues we face on the roads and hopefully highlight why the reaction was as strong as it was.

That was easier said than done. Although enthusiastic to follow up on or offer, it turned out that he didn’t know how to ride a bike (yes, honestly). So instead, we invited him along to see the work we do with schools in the borough through The Turning Hub, Richmond’s mobile bike club. We wanted him to witness the enthusiasm of kids for cycling (particularly after the Olympics) but to also understand the barriers to cycling to school in the borough. It was an interesting event, on a particularly cold rainy day in November, and he came away seeing the evident enthusiasm of the kids and we hope a new perspective of cycling and cyclists. 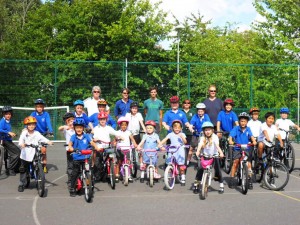 Some of The Turning Hub's Work in Local Schools

As part of the event, The Richmond Magazine promised to produce an article highlighting the barriers to cycling to schools in our borough. Written by a mother who cycles with her son to school, we feel it is a very good article. Here’s the introduction:

“On a muddy school playing field in Twickenham, a group of boisterous 13 and 14 year olds are making tighter and tighter turns around a circuit of bollards. Over the months, instructor Jonathan Rowland from The Turning Hub – a bike club run by local enthusiasts – has not only improved their skills, but has lit their interest in adventure cycling. Their chatter is full of bike polo, cycle cross and long rides to the Surrey Downs. But as we turn to leave, the bikes go back in the lock-up. Not one of the participants has cycled to school. It’s not safe, shrugs Jonathan, gesturing to the road beyond the school gates, a snare of fast moving traffic straying in and out of a narrow painted cycle lane.”

You can read the article in full online – Wheels of Misfortune

A big thank you to Jonathan and all the team at The Turning Hub for hosting Mr Nye. You can read more about what they do and which schools they currently have clubs in on their website – www.theturninghub.co.uk. Is your kids’ school one of them?

Cycling to school is something we feel very strongly about and an area where Richmond Council should do a lot more. A recent study showed “Cycling or walking to school increases a child’s ability to concentrate in the classroom” and “adolescents who cycle are 48% less likely to be overweight as adults”. We would love to have this as the school run in our borough –http://is.gd/M4ZcO2 Given the congestion and pollution caused by parents driving kids to school, everyone benefits. The Council has spoken many times about an Olympic Legacy of cycling in schools. Wouldn’t it be great to have a legacy of cycling to schools. To achieve this, a real commitment is needed to provide safe routes for mums and dads to cycle with their kids to school, not half measures like this recent consultation on a road which acts as a key route to five local schools and a number of nurseries.

(By the way, we’ve also offered to teach Mr Nye to cycle, but we’ll wait to see if he takes up that offer!)