We know Richmond has 5% transport share for cycling – which is great compared to a fair bit of outer London – but did you know that we spend 15% of our transport budget on cycling? (See the minutes here.) 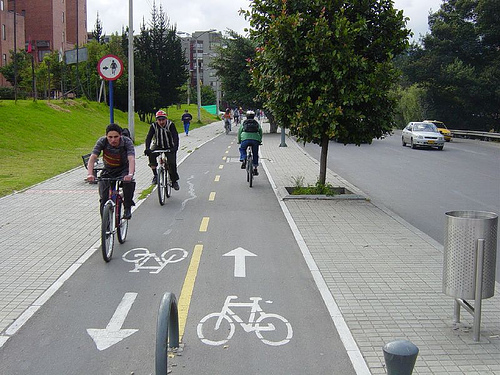 What Richmond doesn't spend cycle money on. Picture from http://omonaij.wordpress.com/2012/11/04/nigeria-introduces-bike-lanes-bans-okada/

Well, we were a bit sceptical, given the council’s general attitude to cycling and how it might benefit the borough, so in November I asked Councillors Harrison, Harborne and Naylor if they could explain the numbers: how did they get to the 15%?

Perhaps not surprisingly, no reply was forthcoming, except from Cllr Harborne, who at least sent me a link for the budget paperwork. So I sent them a Freedom of Information request. You can see it here.

And the basic result seems to be that the council couldn’t break out cycle spending from the overall transport numbers. Which is disappointing, because you’d hope that what elected officials tell you would have some backup.

We’ve asked for an explanation, but wouldn’t urge anyone to hold their breath.

Dear Councillors,
We were told in October’s CLG that cycling makes up 5% of transport share in the borough, yet consumes 15% of our transport budget. (Minuted here: http://www.richmond.gov.uk/council_committees_list?mgl=ieListDocuments.aspx&CId=453&MId=3069&Ver=4)

But you couldn’t be bothered to reply to my enquiry about this, so I sent a Freedom of Information Request. (To be fair, Cllr Harborne did reply with a link to the accounts.)
You can see the request here: https://www.whatdotheyknow.com/request/what_does_the_council_spend_on_d

Unfortunately it looks like the council is unable to separate out cycling spending from anything else, so perhaps you could enlighten me as to where these numbers come from?

2 thoughts on “We ask the tricky questions, so you don’t have to.”