They’re starting the detailed designs for Twickenham, and it’s not good news.

We’ve tried hard to engage the council, and to push the focus that both LCC and the Mayor’s Office are giving to ‘Going Dutch’. A previous meeting seemed to indicate that things were really starting to look positive, but the new plans (PDF here) are very disappointing indeed. Advisory cycle lanes that share the width of the nearside motor vehicle lane and disappear where they’re needed most. At junctions, where most collisions occur, those on bicycles have to fend for themselves, great if you’re trying to cycle to school with your children. And the newly located bus stops, aside from inconveniencing those who visit Twickenham by bus, add new dangers along Cross Deep. 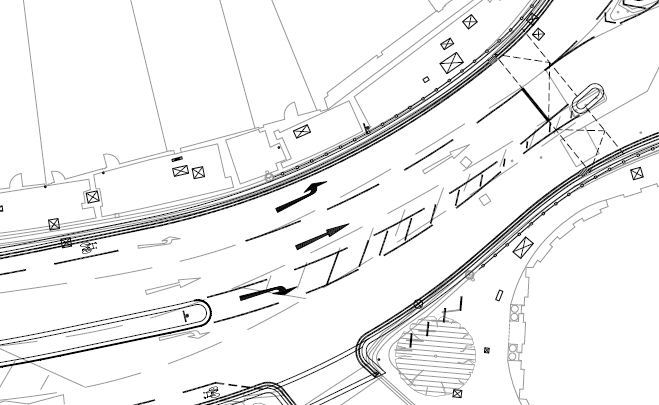 Spot the cycle lane - now you see it, now you don't (click for full drawing)

In the week that saw the first death in London on a hire bike, Richmond Council is again offering us a design based on the discredited and dangerous facilities that bloggers like Twowheelsgood and Citycyclists are directly linking with the continuing maiming and death of cyclists in our city. A painted line will do nothing to protect you from an impatient lorry driver.

Cycling *is* a safe thing to do, and our borough is a pretty safe place to do it, as well. But we know from report after report that the people who aren’t already using a bicycle have probably chosen not to get on a bicycle because they perceive it to be unsafe. And the new Twickenham plan isn’t going to help.

We’ve written to the council to tell them how concerned we are (you can see the full text at the bottom of this post). Perhaps Richmond can win its Mini-Holland bid, because there’s indications that Twickenham might be partially fixed with that, but we can’t risk it: right now the borough is bidding to spend £8m of TfL’s cash on the new Twickenham, but it’s neutral at best for cycling. We think Twickenham is somewhere that should welcome families and visitors by bicycle, whether they’ve come from nearby, or from the station, or are just popping in to get a loaf of bread or a coffee.

The Cycling Liaison Group meets this Thursday – the meeting is open to everyone so join us to ask the council why they’re giving so little priority to persuading people that cycling is a pleasant attraction option for getting around our area.

If you’re planning to come, drop us a note at campaign@richmondlcc.co.uk if you need any more info.

Thank you for sending us the detailed plans for Twickenham.

Unfortunately, it is very hard to see how RCC can offer any endorsement for the plans as they stand. As you know, we were very pleased to see Andrew Gilligan and Boris Johnson bring together a real commitment to cycling for everyone. We believe that getting on a bicycle can – and should – be the most obvious travel choice for the majority of journeys in our borough. We also believe that to get people to consider cycling as a transport choice it needs to be safe and feel safe. Survey after survey tells us that people who don’t cycle equate sharing the road with HGVs and buses with a very visceral feeling of danger.

You’ll have seen recently that the local police are finally enforcing the cycle lane across the bridge by the station: the ongoing issues here are a perfect demonstration of why cycling needs its own space in the new Twivckenham, and yet the nearest concession to any new space comprises a couple of advanced stop lines.

These plans give little confidence or succour to mums and dads who want to cycle with their children to school, or indeed anywhere else in Twickenham. Instead they combine all the features which make cycling in the United Kingdom a specialist contact sport. They include;  incomplete routes; junctions that require a cyclist to force her way into the main traffic flow; conflict-inducing pinch points, and hair-raising junctions.

RCC members have made a concerted effort to talk to the council about what might make Twickenham a good place for cycling, and it’s worth looking back to some of the meetings and discussions we’ve had, and some of the ideas which don’t seem to have made it out of our minutes of these meetings:

A key point from the Gilligan review is that you can’t have a meaningful cycle route if you do nothing at the junctions. Yet this plan offers virtually no improvement at junctions compared to Twickenham currently. The mayor of London has a compelling vision for cycling for everyone in our city, and it is with huge regret that I have to tell you that I don’t think the plans that we’ve seen do anything to advance that vision.

You can see our minutes and notes about previous meetings at these links:

7 thoughts on “Twickenham – we had one step forward, now it’s two steps back.”