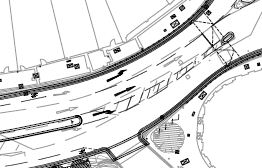 Spot the cycle lane - now you see it, now you don't

Lord True thinks Twickenham should “Go Dutch“. Parliament unanimously supported the Times’ Cities Fit for Cycling petition. And Richmond is in the next round of mini-Holland money that’s on offer to the outer boroughs.

So how come the plans for Twickenham are still so poor? Whilst it is good to be able to meet council officials and discuss the plans they have, these meetings seem to be becoming as useless as the Cycling Liaison Group – lots of opportunity to talk, but nothing of any substance ever really comes of it. In this case, we’re still looking at :
So, from our point of view, it’s hard not to look at all the effort that Richmond Cycling members have put into Twickenham, and ask “Why did we bother?” Sadly, it’s not really much more useful for cycling than it was two years ago, despite I would hate to think how much time and money has been spent on these plans. And we’ve barely even started spending the millions of pounds that TfL are being asked for …