On Friday, Darren Johnson is coming to Richmond to see what cycling is like here, so we’ve put together an open letter to him about using a bicycle in our borough.

Welcome to Richmond. Ours is a borough of extensive green spaces – like the marvellous Richmond Park – and we straddle the river Thames. 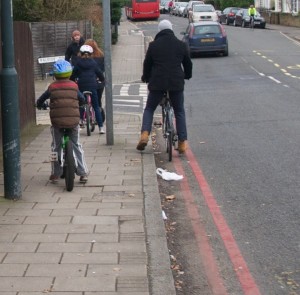 This is how we ride in Richmond …

But despite the green spaces, the busy town centres, and the significant growth in primary school numbers, we’re still a borough who don’t really like to encourage cycling by providing somewhere safe to do so.

And the recent, tragic death of Henry Lang, at Richmond Circus, is a reminder of just how far there is to go. This happened at a section of road and cycle way which is emblematic of cycling conditions in the borough. If you were driving along the A316 from just before Pools on the Park to Lower Mortlake Road, then you’d have to stop at up to three separate junctions. If you were choosing to use a bicycle, and the cycle lane, and were on the same route, you might have to stop on ten separate occasions to travel the same distance. (And that doesn’t include a junction we’ve previously called ‘the most dangerous cycle lane in Richmond’.)

Richmond Council will tell you that the A316 is part of the ‘Transport for London Road Network’ (TLRN) and is therefore not something that can be sorted out by borough engineers. If they say that, you could always ask them why Mini-Holland bid money was spent on the A316 rather than – for example – making the two lane highway through the centre of Richmond a nice place for families to arrive by bike.

You could also ask them why the last time they did anything for cycling, it involved a big pot of Dulux and a ruler, and the statement that “There are many examples where advisory cycle lanes of less than 1.50 metres [that] provide a safe and convenient facility for cyclists” (pdf) to create a laughable cycle lane which ends just before you need it, crossing Richmond Bridge. 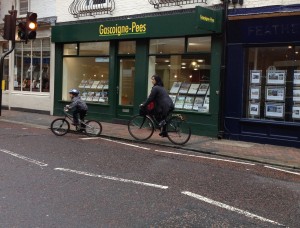 Families ride together in Richmond. On the pavement, of course.

But if you really want to know about cycling in the borough, just look at how much effort has gone into Twickenham – and how much TfL money – for some wider pavements. Richmond Cycling has spent enormous effort to try to help councillors and council engineers understand what might encourage cycling, but our appeals have fallen on deaf ears:  Twickenham is going to carry on being a great place to drive through, and a terrible place either to arrive by bike, or to get through by bike.

So, Darren – welcome to our borough, it’s a real shame that there’s so little positive news we can offer you.