More and more councillors are writing to us and to local residents to support the ward asks we chose before the election. 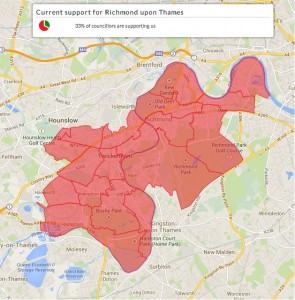 Since the new administration was elected we have had confirmation from Peter Buckwell, Geoff Acton, Jean Loveland and Penny Frost that they support the specific ‘asks’ in their wards of Ham Petersham and Richmond Riverside, South Richmond, and St Margarets and North Twickenham.

Also, we’ve heard from Brian Marcel, who we also met last week, about his support for a safe route from Sheen Gate to Mortlake Station. So we’re hopeful that cycling in the borough is looking up this year.

And a new cycling champion has been appointed – Councillor Jean Loveland, who has already come along to a ride organised to look at the ward ask in Ham, to create a safe route from Ham to Richmond. Finally, Richmond Cycling Campaign met councillors last week to discuss how we can move forward in a more productive way than with the last administration. All of this is still just words on a page, but we’re hopeful that at a time when more avoidable deaths and injuries are happening in London and in our borough, we can start making Richmond a great place to cycle.

If you haven’t seen it yet, pop along to the Cycling Embassy of Great Britain to see a post on what we agree a great cycling facility should look like.

One thought on “Space for Cycling in Richmond – more councillors sign up.”