I first attended our local Police Liaison Group a couple of years now. It all started (like so many things these days) because of a twitter-fit: after almost being run off the road again on my ride home by an inattentive driver, I tweeted Richmond police asking why they didn’t prioritise doing anything about dangerous drivers: “Police priorities are set at the local PLG meetings” I was told, if I wanted to change them, I would have to attend. I suppose like most people, I was sceptical of the impact these forums could have, but still: “decisions are made by those who show up” I told myself, and pencilled the next local meeting into my diary, more out of curiosity than anticipation. 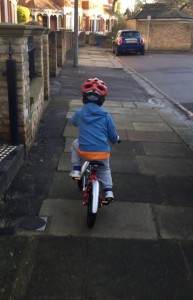 Riding on the pavement … of course.

At the first meeting I showed up to, there was deep hostility to anyone speaking up in favour of cyclists, and more balanced policing of the roads – this was a deeply conservative audience. The borough was overrun by a plague of cyclists, regularly knocking down pensioners on the pavement, and my motion to replace “Cycling on pavements” as one of the ward police priorities with “Dangerous road use (by all vehicles)”, was defeated, with only two right-minded people siding with me. After attending two or three more (of these quarterly) meetings, and now that my face was familiar, and the regulars knew I was actually an upstanding resident and not a rogue cycling campaigner, and with the help of a couple of other local cyclists, we managed to get the priority changed to “Road safety”… time to relax and celebrate, and enjoy the Twickenham road “improvements”. 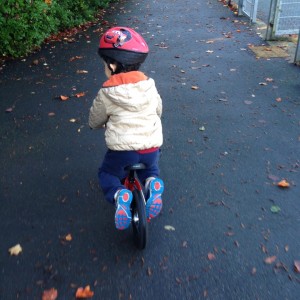 But….things don’t stand still….and as part of Boris’s update to community-police relations in London, “priorities” got renamed “promises”…’so what?’ I thought, and my attendance of the meetings waned. Big mistake! When the minutes of the next meeting came through, I discovered that the blue-rinse brigade had used the opportunity of the change in name (I am reliably informed, that it really was just a rebranding, and not a change of process) to re-insert “cycling on pavement” as a community promise. Deep sigh.

I was travelling on business for the next two meetings, so 3rd March, was my first chance to get this over-turned. Right, I thought….armed with statistics….how many KSIs in the borough due to motor vehicles, and how many due to bicycles? By now, people knew my face at the meetings, and I got a couple of polite “hellos”, as well as a question about how I found the new Twickenham cycling lanes (significantly more dangerous) – ironically, one of the spots often cited as being plagued by cycling on pavements (Cross-deep / King street corner) is also one of the most dangerous for cyclists, which the “improvements” have only made worse….sadly the irony is lost on the other attendees. I don’t objectively know how bad a problem cycling on the pavement is in that spot, but its undoubtedly true that those who do break the rules there do so largely from impatience at having to wait for the lights, rather than out of a fear for their own safety. It is however a good example of how a big and expensive recent set of infrastructure works completely missed the opportunity to improve the road for unmotorised road users – while the pavement is narrow further up the road, it is very wide on the corner, and a full cycle lane or even segregated filter, could have been accommodated, if the safety of cyclists had been a priority.

The ward police proudly trott through the number of tickets they have issued to cyclists jumping red lights of riding on pavements (18) and the number issued for motoring offences (23), and I hold my tongue. Then, near the end of the meeting, when the ward “promises” (or are they still “priorities”?) are set, I speak up: “I really think we should remove the focus on cyclists” I say, “in favour of all dangerous road users”. The chairman, Colin Heath, who has gradually come round to the correct way of thinking, or maybe has just be worn down by my stubbornness, murmurs something in agreement. “But cycling on the pavement is a real problem” exclaims an elderly lady in the corner. “I don’t deny that it happens” I respond, “nor condone it…but our priorities have to be proportional to the harm. How many of the KSIs (Killed or Seriously Injured) in our borough in the last year,” I turn to the two policemen present “have been caused by bicycles, and how many by motor vehicles?” We all know the answer. The usual prejudices now get trotted out…but noticeably quieter than when I first attended a couple of years ago: “but they just cycle off”, “its so difficult to identify cyclists”, “they all jump red lights”, “they should have number plates”, “they have cycle lanes right there, but still ride on the pavement”. The policemen explain that the law will soon change (I think its actually a guidance change, rather than a law change), and that going forward, only aggrevated or anti-social riding on pavements would be prosecuted. I explained that even as a considerate cyclists, I sometimes had to jump onto the pavement – normally to avoid a lorry that had veered into a cycle lane without checking his mirrors (at Barnes junction this happens almost every day), but that a collision with a cyclist caused significantly less harm than a 10-ton lorry, which distracted on their mobile phones, regularly speed down our residential road, which my kids have to cross to go to school. “I’m not condoning cycling on the pavement, or jumping red lights I explained, but there is no evidence that cyclists break the law any more than other road users, and our priorities have to be proportionate to potential harm”. “OK” said Colin, “lets change the ‘promises’ to target road safety among all road users, not just cyclists”, not looking up for anyone to object.

The police then explained that in the future, motoring offences would no longer be ‘ticketed’ at the road side, but that all offences would be referred to the traffic unit, who would decide whether to summon offenders to court, or offered a speed awareness course or 3 points on their license. “Good” I said. I concluded by asking the officer whether the perception that they are reluctant to ticket motorists who infringe an ASL (advanced stop line) because they don’t think its as serious as running a red light, “absolutely not” was the reply, “the law allows for vehicles to stop in the ASL, where it would be dangerous not to do so, such as when breaking sharply when a traffic light changes, but we deal deliberate infractions of all traffic laws in the same way”. “Good” I said. Even though I suspected this wasn’t quite true, the point had been made, and who is to say, thats not just my prejudices talking too.

As I walked home, I felt a bit of a phoney…for the first time in years, I haven’t weathered the winter cold, and have been commuting on the train…never mind, it will be getting warmer and lighter soon, and when it is, I’ll need safe roads to cycle on. I’m not a campaigner, nor define myself as “a cyclist”…I’m just someone, trying to get from A to B in one piece…aren’t we all?

One thought on “Making a difference … one person, one meeting at a time.”