While the rest of London is making real efforts to be nicer for cycling, Hampton Court Palace seems to think that cycling is more of a danger to its visitors than driving. 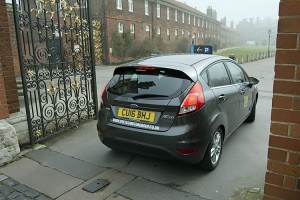 One of our members has asked why it is possible to drive into the palace (to access the car park), and yet if you arrive by bicycle, you’re forced to dismount at the gates. We were very surprised to learn that:

As cars can be heard they are considered less of a risk to the general public than cyclists.

You might be asking ‘It’s not a hardship to push your bike, is it?” and for many people, it’s fine. But if you’re a small child, or if you have any sort of mobility impairment, or if your bike is heavy or unwieldy, then you definitely don’t want to be pushing that bike.

So we also asked why cycling might not be permitted on the paved areas where driving is allowed, they responded:

[that cyclists] could potentially damage the grass and garden areas.

If this were a completely pedestrianised area, with no motor traffic, then we might have some sympathy for the view of Historic Royal Palaces on this one, but they’ve not even put cycle racks anywhere near the entrance, nor made any other particular concessions to encourage people to cycle instead of drive, so we’re asking them to fix this bizarre policy pronouncement. 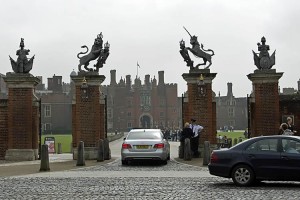 You can drive a ton of motor car in, but please don’t endanger us with your bicycle. 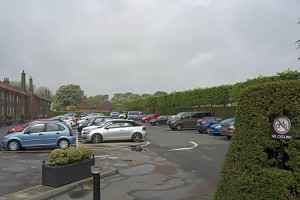 A big car park … no cycling. Can you see any irony here?

2 thoughts on “Hampton Court Palace would prefer you to drive, rather than cycle.”