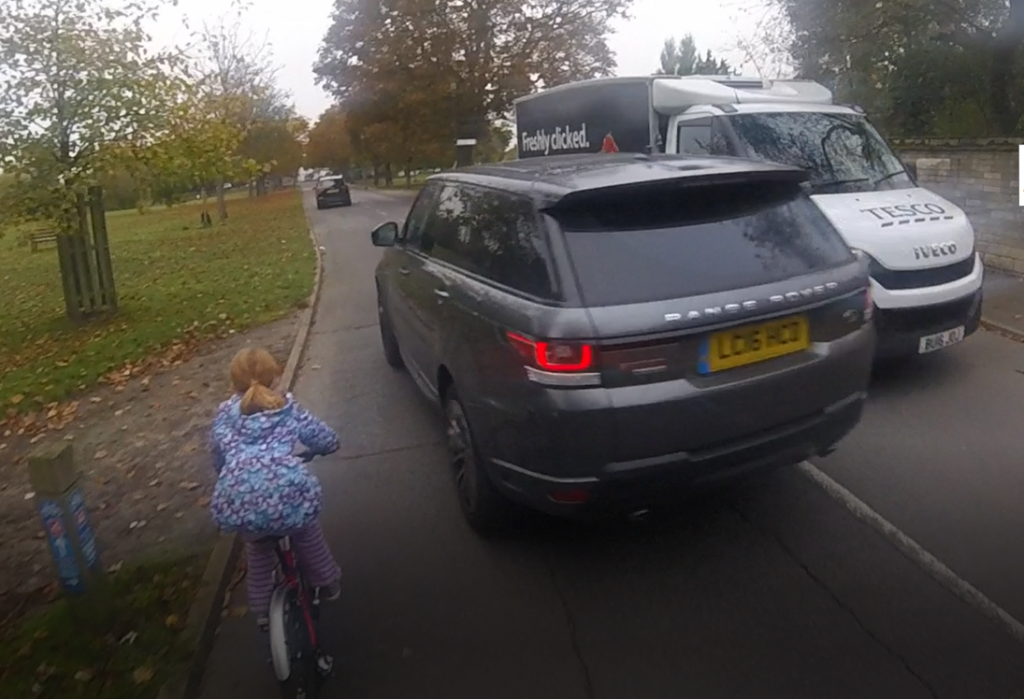 The close pass experienced by the daughter of our borough coordinator. You can see the full video here.

Richmond Cycling Campaign is calling on local police to follow the example of West Midlands Police, and now Camden Police, and begin actively targeting bad and dangerous driving in the borough.

“As a police force we must do our upmost to protect vulnerable road users and show that anyone who puts them in danger through poor driving will be dealt with.

“Cyclists may suddenly need to avoid uneven road surfaces or obstacles like drain covers so it’s important to afford them plenty of room when overtaking.

“We know through our work with the Birmingham Cycle forum that close passing is the single biggest deterrent stopping more people from taking to their bikes.

“Some drivers get tunnel vision; they’re only focus is on getting from A to B as quickly as possible. They don’t pay any attention to vulnerable road users and we’ve attended some horrific scenes where cyclists have been wiped out by drivers who’ve not even seen them.

“Drivers need to consider that a cyclist they are overtaking could be a police officer − and if they don’t pass them safely they could be prosecuted.”

Cycling in Richmond, we receive regular complaints and warnings about some areas, about people being intimidated by close passes and other poor driver behaviour, and we’d like local police to move on from enforcing of Advanced Stop Lines to assertively managing this type of intimidation and illegality.

“People are just asking to be able to cycle around safely. And until things like this are dealt with, our roads will remain unsafe, and the majority of borough residents will carry on choosing to drive, rather than feeling cycling is a safe option.“

Rides coordinator Paul Luton, who has led rides throughout the borough for over a decade, said:

“Too many routes are unavailable to us because of this type of behaviour. We have all ages and abilities on our rides, and it’s desperately disheartening when new cyclists are terrified to get back on their bikes because of the behaviour of a selfish and dangerous minority.“

“25 years cycling on London’s roads has not diminished my fear of close passing motorists. I completely understand why it would discourage new cyclists including parents who would like to swap the car for bikes on the school run but don’t feel it is safe.  I would really welcome the police asserting what is unacceptable and dangerous driving around cyclists by targeting this behaviour.“

“I have had so many experiences on my bike like the one in the clip. I think that problematic road design, lack of 20 mph zones and lack of clear training about overtaking bicycles as part of the UK driving test all contribute to this problem. Sometimes I have caught up with drivers at the traffic lights and politely let them know that they overtook far too close and they have been genuinely surprised.“

“This is a cycling issue but it is also a human issue. It’s a shame that one of London’s leafiest boroughs cannot be enjoyed to its fullest by those on foot or bicycle because of reckless driving. More needs to be done to protect vulnerable road users and the police must play a role in this.”

And you can read about Camden doing this, here: http://londonroadsafetycouncil.org.uk/camden-police-go-undercover-to-catch-close-passing-motorists/

And Cambridge police considering it: http://www.cambridge-news.co.uk/news/cambridge-news/watch-terrifying-footage-cars-passing-12114509

3 thoughts on “Time for Richmond Police to do their bit”