The council is consulting on its “Local Implementation Plan” – £1.5m a year of transport spending for the next three years – and they have to make it good, to get the money from TfL.

The consultation is here and you can read the full document as a PDF link here.

Our final response is below – please have a look and take a moment to tell the council what you’re really interested in seeing the money being spent on. 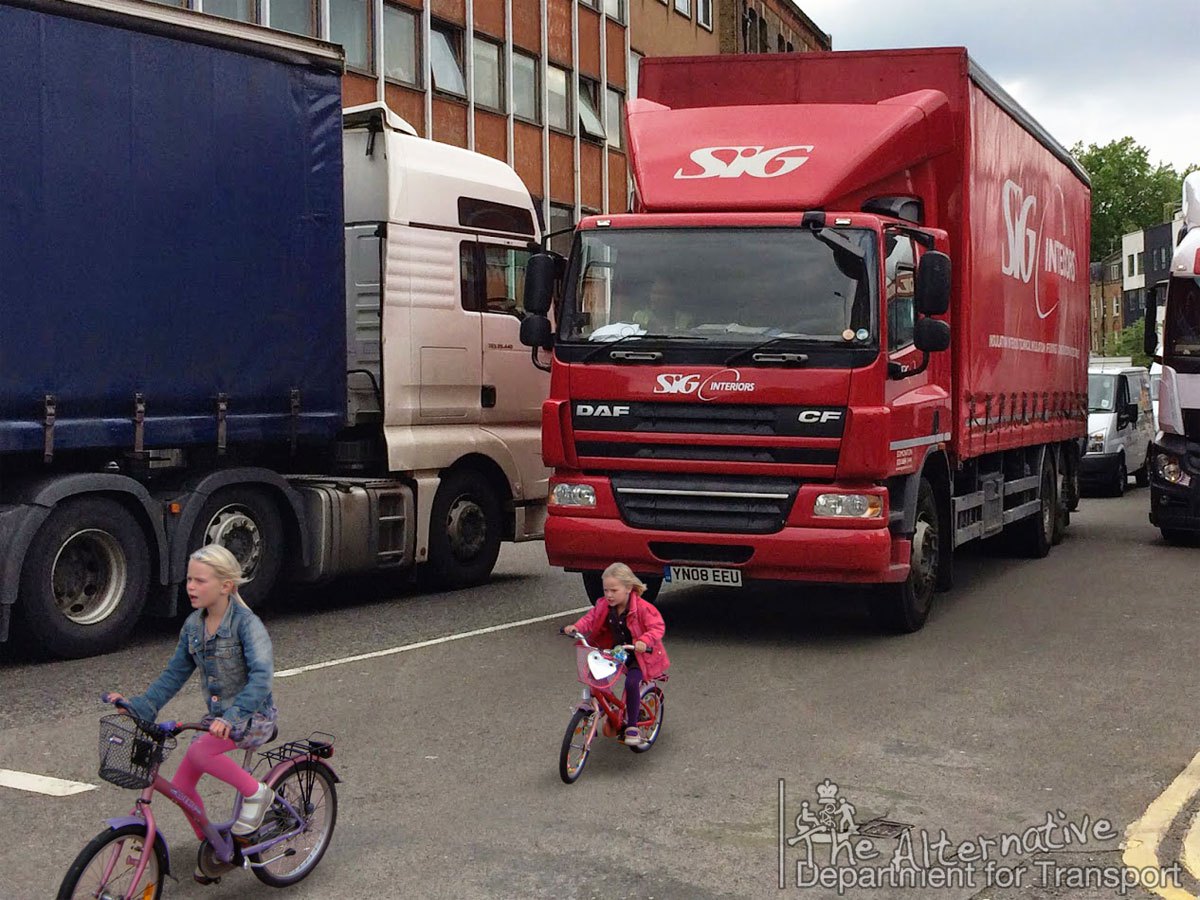 This isn’t what our transport spending should be supporting ..

Richmond Cycling Campaign opposes the borough’s LIP3 submission. We have talked to both officers and councillors, and we believe that there is both the interest and the will to pursue what we would characterise as ‘proper’ walking and cycling for our borough.

The LIP acknowledges the comparatively high levels of walking and cycling which Richmond enjoys, compared to other outer London boroughs. However, it does not provide sufficient detail or strategy to show how the borough will deliver the hoped-for improvements in walking, cycling and public transport use.

We welcome the borough’s objectives of making safe, active travel an option for everyone. We also support the aspirations to make public transport better, and the proposals for the enablers around these activities.

Richmond Cycling Campaign believes that the LIP – as a document which sets out our strategy not only for the next three years, but for the further future – lacks sufficient detail for goals, and lacks a strategic network plan.

We would like to see clear, measurable plans, for example: :
• A commitment that every one way in the borough will either have a contraflow, or will have been assessed and then agreed not to be appropriate
• Every school to either have a school street, or a set of interventions agreed with parents and school
• Every doctors’ surgery to have bicycle parking that is at least as close as the nearest car parking. (This should be the same for every public facility in the borough.)
• A cargo and electric bike library managed by the council, so that residents can trial these, but also so that they can hire them, like Camden and others
• Creation of a full borough cycling plan and map, and an inventory of all requests for stands, parking, cycle routes, pavement repairs, etc., publicly available
• A clear plan built in this year’s LIP for a dense network of cycle routes, which will be supported by work in subsequent years, so that by 2041 everyone can cycle safely from their home to any destination in the borough
• A comprehensive plan for traffic cells and liveable neighbourhoods across the borough, so that, wherever possible, people live on a road which isn’t used for through traffic
• Specific funding for an officer to support the bike library, school activities and cycling events, and to support parking planning
• Traffic management plans for the new developments around the borough, to ensure they aren’t just delivering more traffic (Mortlake Brewery, for example)
• Conversion every bus stop in the borough for accessibility
• Making every town centre accessible by walking and cycling, including specific commitments on the number and density of crossing points
• Use the Strategic Cycling Analysis as the primary source of route planning
• Choose an area as a low traffic neighbourhood
• Want to engage properly with Bike Week, and other activities like this: car free day, etc.

While we recognise that both officer time and budgets are highly constrained, we believe that the borough should state its ambition for these things, so that we have a delivery plan to aim for: a plan which lists our bus stops, our schools, our doctors’ surgeries, and our routes, and prioritises them, is something we can constantly strive to achieve, and constantly measure against.

We would like to propose that the borough seeks funds to be part of the Ultra-Low Emissions Zone. The current plans will cut the borough in half, with enforcement on one side but not the other. If cutting emissions is good enough for central London, it should be good enough for us, and we believe that the council should ask TfL to explore ways to bring the whole of the council area into ULEZ.

The Equality Assessment seems to miss an opportunity: by providing proper cycling and walking facilities, countries like the Netherlands and Denmark show that these projects are a substantial benefit especially to older people and minority groups. Studies have clearly shown that policies which prefer the motor car are effectively policies which act against equality goals – see the Sustainable Development Commissions’ “Fairness in a Car-Dependent Society.”

We believe that the Equality Assessment is an opportunity for the council to shout loudly about how addressing the previous emphasis on driving is a significant step towards removing inequality in the borough. A robust LIP and associated policies is a clear signposting of such ambition.

For example LBRUT will:
• Ensure every bus stop is accessible by 2041
• Provide pedestrian priority crossings at every junction in the borough
• Provide every primary school with safe, car-free access within an agreed radius
• Develop a zero-emission delivery pilot in one of the borough’s town centres by 2022
• …

P15: the quietways map is not good enough as a plan for a strategic cycle network. Our plan should include not only these plans, but also all the SCA analysis, and whatever borough plans we have building on existing infrastructure to create a borough-wide network. The network should be accessible to all 8-80+ using segregation / filtering as appropriate.
At a minimum plans for the 2 SCA priority routes identified ( Twickenham -Teddingt on , Sheen-Putney) will be drawn up by the end of 2019.

P16: Ofo has withdrawn from the borough, so we probably need to recognise this somehow.

P18: Borough objectives. We should state that every one way street in the borough will be contraflow. Unless there is a compelling reason otherwise.

Bullet “healthy routes to schools” mentions ‘site lines’ – should probably be ‘sight lines’. Cycle routes should be at least to the standard of the Mayor’s Cycling Strategy
Can we commit here to School Streets for every school that wants them?

P19 appears to propose ‘education and training’ for walking. If we think we need to educate people to walk, we’ve failed.

P21 not clear how these figures make up a trajectory:
“Seek to minimise impact of level crossings on pedestrians and cyclists” doesn’t really offer anything: it’s a vague aspiration with no action attached to it. This is the kind of thing which could be specifically analysed as part of the planned expenditure.
P22, fig 9: how did we get to these as a trajectory? There’s no immediate activity which will encourage this.

P24: increasing permit prices for diesels is only going to be a partial fix, and in any case is likely to simply result in the borough providing an either direct or implied subsidy to those able to buy new cars, whilst not really providing any discouragement for csr ownership (if that is the goal).

P24 – borough objectives. These could also be clearer and more specific. We recognise that not all of this can be done at once, but we want a ‘menu’ of activity so that the council is constantly pursuing useful, agreed plans.

P25: Clean and green. Is there anyway we can extend the ULEZ to our borough, too? If TfL is setting this up, why not ask for its extension, with borough support?

P29: aiming for all bus stops to be accessible. Can this be identified somewhere as a specific target?

P29: accessibility of train stations. Need to also list our stations, and have a plan.

P32: sustainable development … we should identify that the challenge here is making developers write proper travel plans which put walking and cycling first.

P33 – transport investment. Perhaps a good thing to spend money on would be to understand capacity of transport in the borough: for example, how does it work if we build new developments which feed commuters into the train services into central London, like Mortlake or North Sheen? Should we be looking to get more people to fast service stations like Richmond?

P34: we should identify the major projects we have, and say what we think we need from them, and what the concerns are.

P37: Speed indicator devices are rotated, but no data is gathered from them, which makes them a little bit of a sticking plaster.

P37: Mentions a study to improve walking and cycling in the south west. Not clear what this study is – is it referenced in the spending plans?

P43: We should be considering whether a work place parking levy is an appropriate measure to take.

P50: the biggest risk is that the lack of specifics in the plan mean we won’t deliver anything.

P55: local targets. It is quite unacceptable to have a target of 300 EV charging points, but just 100 bicycle stands.

P56 onwards: Table ST07 should have current values, and targets for interim years, too.
P59: outcome 5 – a good public transport experience. Increasing ridership on public transport is a good thing, but we must recognise that this should not be at the expense of walking and cycling numbers. We should state explicitly that increasing public transport use can only come from discouraging ( sorry but if we want modal shift this has to happen) private car journeys.

P57 outcome 1 : The borough will engage with TfL to suggest and facilitate the spread into the borough of the London cycle network. 60: Outcome 9. “Active, efficient and sustainable transport will be the best option in new developments. “ We should identify all current developments, and have a specific plan about how all new developments will have this baked in. The proposed new site for Turing House School will be an exemplar for this approach.

p61 : schemes.
A307 Kew corridor. This needs a cycle lane. Badly. This proposal just puts off doing anything.
“Borough wide collision investigation”. What will this tell us? Looks like 5k pa which won’t lead to anything.

A310 again 280K on a study. For free we have substandard cycle lanes hard up against parked cars and giving up at Waldegrave Rd junction. Safe for cycling would be a 2 way segregated track on the east side. If too financially / politically expensive promote alternative route.

P62
Future safety schemes. Looks like 191k of vagueness.
It is not quite clear why stations need 50k studies: would it not be preferable to do one station at a time, and get it done?
Barnes High St neighbourhood scheme. This is £260k over three years for a place which is a traffic sewer. This money is highly likely to be wasted if there is no traffic plan associated to it, and no cycling plan.