We strongly approve of the hierarchy propounded in the introduction :

Perhaps a category 8 could be included – use of road space for storage of motor vehicles ?

We note that the intention to reduce local pollution and greenhouse gas production is implicit in the above and could well be made explicit as a valid reason for promoting active travel. In that context it could be argued that cycling is even better at replacing polluting modes for more purposes than is walking.

It is , however, important that this in not merely lip service and the hierarchy is actually used to determine outcomes where competition for road space arises.

We find the Objectives – all very good

Walking and cycling should be the natural choice for undertaking local trips, including accessing local shops and town centres, travel to school and connecting to public transport. The highway network should support these trips, wherever possible, without the need for sign-posted routes.

Whilst ideally cycling routes should be so obvious that sign posting isn’t necessary, we believe that realistically signage is an important part of helping people to get around by bike. We have heard evidence that people are unaware of possible short-cuts as they are used to driving routes.
Signposting can also be a way of advertising cycling especially if times to reach destinations are given.

In terms of target setting we are disappointed that there is no specific target for cycling and find the
target for increasing walking cycling and public transport from 61% to 64% over 4 years unambitious.

Connectivity is of crucial importance but we do not find the porosity map convincing. This may be due to arbitrary choices of which roads to treat as barriers. There is no real alternative to dealing with individual issues here. An on-line system for members of the public to mark in where they have difficulties in crossing would be a useful way forward. (Other boroughs have shown that that sort of engagement is valuable). Places where established routes are severed should be a priority for example Kneller Gardens to Crane Park is obvious.

Where connections across busy roads have been made it is important that people know where they are. For example the toucan crossing of the A316 at Chudleigh Rd Twickenham has no signage from either side.

We are pleased that the drawbacks to the standard kerb build-outs / refuge treatment are recognised.

Obviously if the road is already narrowed by parking build-outs don’t make cycling worse. The worst situations are where a cycle lane is truncated by a build-out. ( Whitton Rd ,Twickenham)

If there is a refuge the gap should be 3m wide or more than 4 m wide but the presumption should be for the use of a formal zebra incorporating a parallel cycle crossing wherever that would be useful. (again Crane Park is obvious)

The accepted value of low traffic neighbourhoods for enabling walking and cycling is not really reflected in :

If low traffic neighbourhoods are to be part of the main drive to supporting walking and cycling surely the introduction should be planned rather than done piecemeal. Some Boroughs , eg Lambeth, have been proactive in preparing a global picture of potential neighbourhoods. Perhaps we should have a target for Low Traffic Neighbourhoods ?

It is a minor irritation that the strategy purports to give the criteria for London Strategic Cycle Network routes but merely lists the variables. Why not give the figures ? There should be some acknowledgement that the minimum standards have been criticised as too minimal.
LCC has pointed out that the DfT’s published guidance for the Strategic Road Network (IAN 195/16) says for motor traffic volumes of over 5,000 daily, cycle tracks are the minimum provision. That’s half the volume TfL is accepting before tracks become mandatory.
At least there should be an ambition to meet all the standards to at least the target standard.

When designing routes then surely the hierarchy of users propounded in the introduction should be used or why have it ? Yet we see :

Designing routes to this new standard on some roads in the borough is relatively straightforward, but there are many locations where space restrictions represent insurmountable challenges. For example, Richmond Bridge is the preferred route for trips between Twickenham and Richmond town centres. The current volume of traffic dictates that segregated cycle facilities should be provided, but the bridge is too narrow. Twickenham Bridge provides an alternate route with segregated facilities but requires a significant detour.

This seems to contradict the hierarchy. If a bridge is narrow and direct it should be reserved for pedestrians, people cycling and buses. The other users should be sent round the longer way especially as the A316 is one of few roads in the borough actually designed for motor traffic.

Perhaps we need an overarching strategy for transport in the borough based on the hierarchy putting what through motor traffic is essential onto roads where is does least damage.

By 2024, a core network will connect Hampton Court Bridge to Twickenham town centre via Hampton Wick, linking to RB Kingston’s Mini-Holland routes, the Wandsworth to Teddington Lock Cycleway and the Brentford to Twickenham Cycleway.

Cycling from Hampton Court Bridge to Twickenham would only go via Hampton Wick if Bushy Park were closed. This is a limited selection of useful routes. In no sense a “Core Network”.

The Map on p 25 shows proposed routes that fail to link up and allegedly existing routes that don’t actually exist. (Bushy Park). Arguably the existing routes should include the Amyand Park Rd route from Twickenham to Twickenham Bridge which is comparable in standard to the Wandsworth – Teddington Lock route.

The pink lines are just drawn down main roads irrespective of any possibility of putting in cycling infrastructure ( main roads would require segregated lanes , 3m if bidirectional and 2×2.2m for with flow) and don’t include the sensible route from Hampton Court Bridge to Twickenham. (Bushy Park, Waldegrave Rd).

Main roads are usually the most direct route but an aspiration that cannot be delivered does not help cycling. Quality alternatives should also be considered on the model of the Twickenham -Brentford route which also reduces exposure to pollution. An obvious general question , which has not been addressed , is can other parts of the LCN be brought up to standard ? We are slightly alarmed to read :

Traffic calming has been shown (eg Burtons Rd) to be ineffective in producing sufficient reduction in vehicle numbers and speeds for safe cycling routes. Filtering (eg Onslow Rd, Richmond) can be seen to work.

There should be a commitment to develop a plan for deliverable network through discussion with local cycling organisations and with Royal Parks who control some of the best places to cycle in the borough.

The council is applying for up to £200,000 in grants to purchase electric cargo bikes to support local businesses and charities. But we need to move quickly, and we need you to express your interest.

If successful, Richmond will be able to purchase a number of bikes which can be loaned to local businesses and charities, to support more zero-carbon transport. You’d be making your local area cleaner and greener, and you’d get more reliable delivery times, be able to park exactly where you were going, safely, and easily.

Ideas you could discuss with local businesses, friends, and groups:

You can download the application form here. And read more details here. 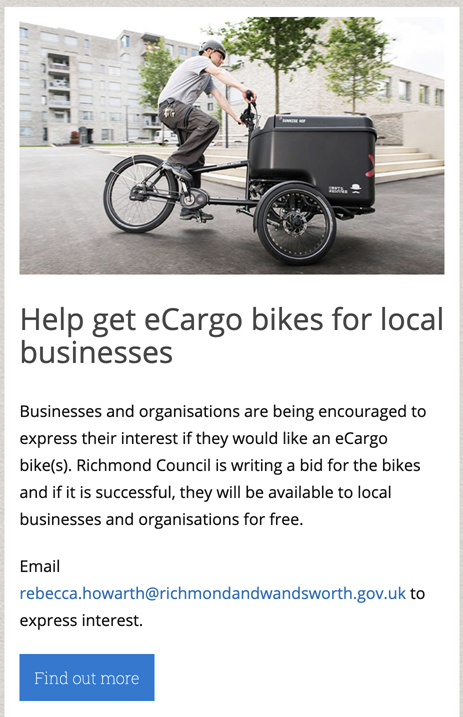 These are the comments made by our coordinator at the planning committee meeting.

You can read the council papers here: https://cabnet.richmond.gov.uk/ieListDocuments.aspx?CId=224&MId=4712

On behalf of Richmond Cycling Campaign, I am asking the committee to reject this proposal because of its manifest failure to provide meaningful transport options for the area which aren’t driving a car.

We know that a new development of this size will generate hundreds of new journeys a day, and we know that space for driving is already at saturation. The developers hint at wanting more people to walk and cycle, and it is Mayor of London and Richmond Council policy to encourage and support more walking and cycling. We’ve also got late changes which are said to be specifically to support ‘active travel’, but these miss the essential need for safe and complete routes.

Instead of new traffic lanes at Chalker’s Corner, we should actually be constraining the space available to cars, and adding space for walking and cycling. And this should follow throughout the area – for example the design which takes out part of Mortlake Green to provide a cycle and walking route that isn’t fit for purpose, and which is there simply because we will not sacrifice car space to space for people.

We’re not asking or expecting for everyone to cycle everywhere, but that the Brewery embeds and delivers the targets in the Local Implementation Plan, Active Travel Strategy, and the associated mayoral strategies:

– Car mode share in the borough falls from 39.4% to 25% by 2041
– Proportion of residents living within 400m of the strategic cycling network – this is 0% in the borough at the moment, and the development does not add to this.
– And a year on year decrease in car ownership 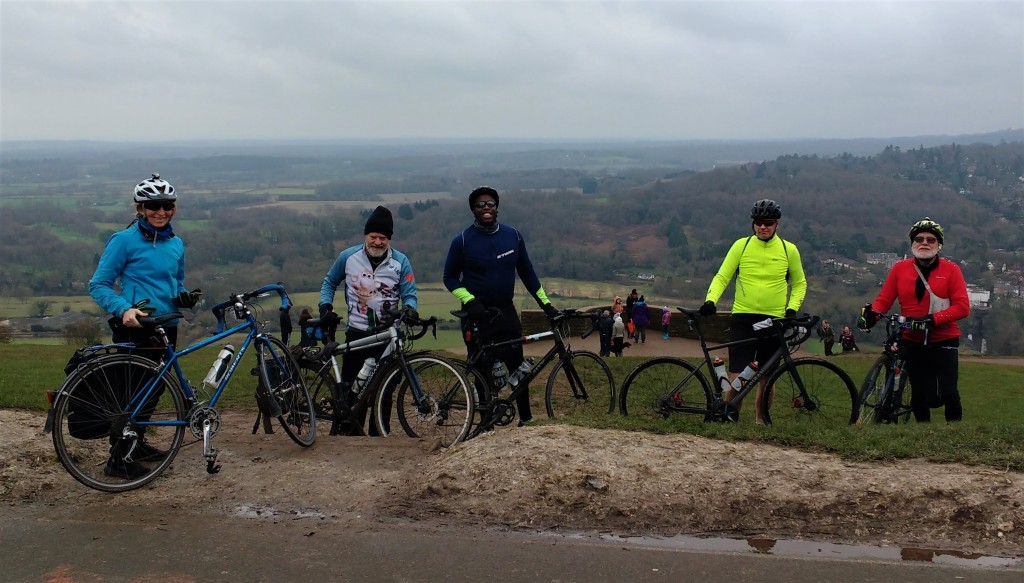 Our traditional post-turkey jaunt but a bit later this year to avoid clashing with Kingston CC rides. On/off road quiet and scenic route to Box Hill then a steady climb to the viewpoint and lunch in NT Cafe at the top (as the pub we used to patronise is now a trendy wine-bar). Enjoy  a switchback descent taking us most of the way home. About 40 miles in total. Better bring lights but expect to get back well before 4.

Route (May be modified if we get much more rain. )

6 of us met up and , apart from a brief light shower had good , if slightly muddy, ride across Horton Country Park and Ashstead Common. After a quick snack at the top of Box Hill we headed back with the wind behind us and got back through Kingston around 2pm ahead of the worst of the threatened rain.

The Active Travel Strategy is out for consultation: https://haveyoursay.citizenspace.com/richmondecs/ats/consult_view/

There’s an awful lot in there, and we need your feedback, and to respond. You can read the PDF document here.

Highlights from the strategy, in no particular order:

And you can email us – info@richmondlcc.co.uk – or tweet us @RichmondCycling – or come and chat on Facebook – https://www.facebook.com/groups/richmondcyclingcampaign/

We meet a group from Kingston on the Ham Side of Teddington Lock at 9.50 and head across Richmond Park , crossing Wimbledon Park, Wandsworth Common, and Clapham Common aiming to get to Brockwell Park by 12. Bring a picnic.

12 miles each way quite hilly.

Six of us went and demonstrated that you can cycle across south London without too much traffic (apart from Earlsfield Station) . We also found that TfL is fond of making pedestrians and cyclists wait at toucan crossings.

I will be heading back about 2 – anyone is welcome to join me. Alternatively bring a physical or electronic map and make your own way. Clapham Junction is not far away for rail assistance back to our area.