Hounslow are consulting on proposals to improve the existing cycle route.

This is a useful N-S link suitable for all cyclists that has recently been considerably improved by the removal of through traffic from the Church Street area.

Regarding the current proposals for improvement :

Whilst the current speed humps could certainly be improved it seems a pity that the route continues to rely on them. A permeable road closure between Dawes Avenue and Napier Road would remove through motor traffic whilst allowing vehicular access to all properties.

This is currently the busiest section and we can see the need for changes. Nevertheless shared use of even a widened footway beside a carriageway is sub-optimal and risks conflict. A discrete cycle track would be a better solution.

It is strongly to be hoped that the 4 gate chicane that has recently appeared will be removed ( it does not seem to be marked on the plans) The chicane is highly discriminatory towards less able cyclists using wider vehicles and is totally unacceptable.

Overall we are happy with the ambition to improve a valuable route but feel that some approaches are less than ideal.

Burtons Road has long been an important route for cyclists enabling them to avoid the busy Park Road. Unfortunately has a long history of rat-running which has been aggravated by the use of sat-navs. Due to the narrowness of parts of the road that can make cycling effectively impossible at peak times. Road humps have been deployed to reduce speeds and there have been previous failed attempts to filter out through traffic.

The current proposals for two road closures and a one-way section should be enough to frustrate determined rat-runners whilst allowing vehicular access. That will return Burtons Road to being a pleasant place to walk and cycle at all times and should encourage a shift to active travel in accord with the mayor’s policies. This will be all the more important in the light of the decision to move Turing House School to Heathfield. It does seem to have local support and

RCC is thoroughly in favour.

Could we also note that the shared use section enabling cycle use of the informal crossing of Uxbridge Road at the end of Burtons road is marked by corrugated paving alone ;signage was never installed. Perhaps some signs might be erected as part of the proposed works.

Perhaps I should include the map showing (potential) connections. 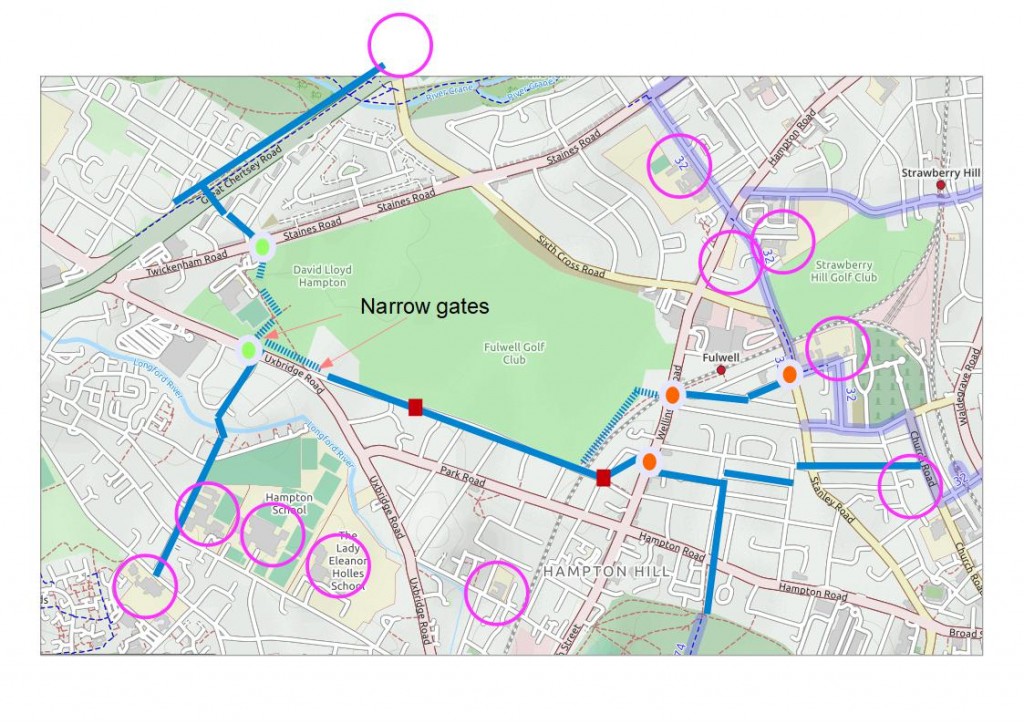 ** UPDATE ** There will be another opportunity to see plans and discuss them with officers in Teddington on 26th November at Teddington Baptist Church. Details are here.

The council is consulting on a substantial new cycling route through the borough, provisionally called ‘Quiet Way 1’. 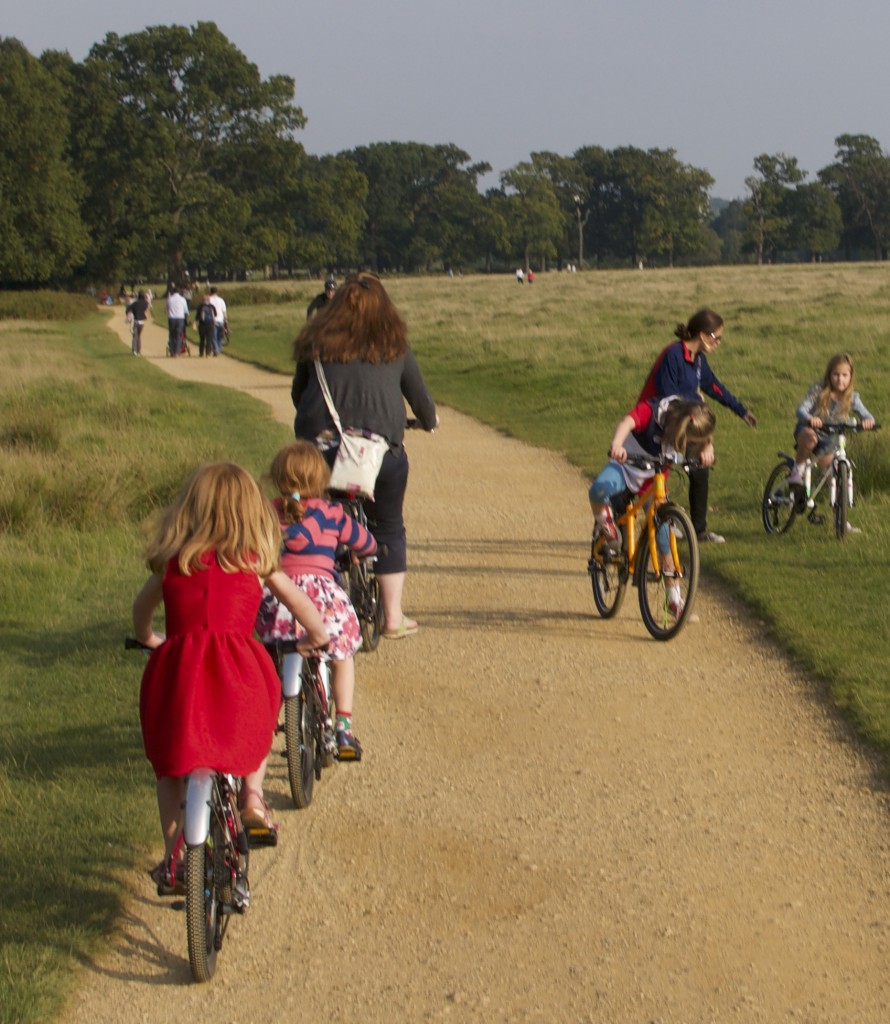 Riding on the Tamsin Trail.

The consultation is online here. You can read our earlier discussion here.

There’s now a new opportunity to review these plans on Monday. The borough cycling officer is hoping to bring the plans to our monthly meeting at the Old Ship (details here)

Although we think there are things missing in the quiet way plan, we’d really like to see a major project like this, and we need your support and views. We’ll have a response out soon, but if you want to know more, please come along on Monday evening.

We’ve been asking members what to talk to the council about at the Cycling Liaison Group. And since it’s an Olympic year, one member has asked us to investigate just what the legacy has been.

“We should remind the councilors that we are now in an Olympic year, and four years after cycling went through our borough there has been NO OLYMPIC LEGACY.

Don’t let them fob us off with blah-blah about educating children etc. My children won’t dare cycle in central Richmond. There are NO new cycling lanes in the centre of the town.

They will talk about Twickenham – as they have in emails to me – but Richmond has had nothing, except a dead cyclist on the A316.

It’s an utter disgrace, as Central London forges ahead with cycling lanes and designated, protected routes.

We should make them understand that Richmond’s children are not safe on Richmond’s roads, and the failure to protect kids (rather than protect bus routes and cars through the town centre) will bring multiple consequences, not least on our health budget, as our kids choose NOT to cycle.

But really, we must nail them on the lack of an Olympic legacy. On some of the very streets the cyclists rode on there are no cycle lanes.

And when there are? Look at the road going over the railway lines at the back of Richmond station –a road with a cycle lane that is 18 inches wide at one point.

Shame. And I’m a car driver, as well as a cyclist.”

You can see this post from our Rides coordinator, written just after the Olympics, hoping for a legacy. And with a bit of digging you can find the lacklustre ambition to make 7.5% of journeys in Richmond by bike when we get to 2026 (see p92 of the ‘second Local Implementation Plan’, hosted on this page). Based on current progress, we probably won’t even reach that poor target.

This is our response to the Crime Priorities Survey (See our earlier article). Please respond too, here, so they don’t unfairly focus on cyclists.

Richmond Cycling Campaign urge you to reconsider the suggested 2015-2016 priorities, in the light of your own data.

Because of the failure to show trend data, previous years’ data, or indeed to break down the types of incident, it’s hard to add a huge amount of interpretation to these numbers beyond “our roads are getting much less safer, and people are dying and being maimed as a result”.

Yet in the accompanying slides, the nearest you come to worrying about this is to put (at number 7 of 8 in your priorities) “Motor vehicle crime and theft of pedal cycle (including cycling on pavements and through red lights)”

Nowhere in your report is there any indication that cycling on the pavement, or indeed through red lights, is a particular problem in the borough. Whilst it is true that a number of your Police Liaison Groups have chosen ‘cycling on the pavement’ as something they’re worried about, this is not backed by any actual data.

We consider it unacceptable to pay so little attention to criminal activity which threatens death or serious injury, and it is frankly shocking that your use of of data is so poor that you can’t show why cycling on the pavement – which is the way a lot of children in the borough cycle – is more important than the excessive speed used on many of our roads, or the large numbers of killed/seriously injured on our roads.

If you’re actually worried about the safety of our community, you need to give greater priority to the things that are putting everyone in the borough at genuine risk, and read the message this data is telling you: road safety has just got a lot worse in the borough, and you won’t fix it by concentrating unfairly on people who choose to cycle.

You can respond to the survey here or email it directly to consultation@richmond.gov.uk

This is a brief response to the Marksbury Avenue consultation.
Please add your response here

In response to your consultation on the changes to the A316 crossing opposite Marksbury Avenue, Richmond Cycling would suggest that this is not a very good use of time or money.

The proposed changes will make virtually no difference to cycling and walking at the junction, and still fail to provide a pleasant solution for anyone seeking to cross the road.

Instead of more piecemeal proposals like this, we’d like to see the Elsinore Way proposal built as soon as possible, and we’d like to see a plan from TfL which covers fixing the whole of the A316, rather than fixing bits and pieces without addressing the core issues the road has for walking and cycling.

This is our response to TfL’s Roehampton Lane consultation.
You can see our earlier article here.

The proposal to add additional traffic lanes to Roehampton Lane is, we think, a flawed and poorly considered one.
Richmond Cycling acknowledges that there are issues with traffic volumes along the lane, but the provision of additional lanes isn’t going to fix the problem, since the traffic issues will be moved to different parts of Roehampton Lane instead.
Yet looking at the road for almost its entire length, there is clear space to provide for safe, segregated cycling. We think this could be a great opportunity to trial a segregated route hiding low cost interventions which can help identify the potential modal share which is available.
Our simple summary is this, however: The proposed scheme will, at best, cause the queuing traffic to be moved to another part of the route. If the aim of this scheme is to reduce the number of problems relating to queues of traffic, then the best solution is to give people an option other than driving.