On Thursday 5th April 2012 Kew Safer Neighbourhood officers found an abandoned bike at Kew Retail Park TW9. Officers carried out checks on the frame and realised it had been a bike that had been property marked by police. They checked the bike marking database to find it had been actually security marked by Richmond SNT police officers. Through the database they found the owners details and restored the bike to him. It had been stolen but not reported to police at the time of finding.

PCSO Lorraine Childs of Kew SNT stated “This is an excellent example of why it is so important to get your bike security marked by police. But for it being marked we would never have been able to trace its owner and return it. When we stop individuals on bikes we always check to see if the bike has either been reported stolen or if the bike has been security marked by police. Sometimes it takes a while for the owners to realise their bike has been taken and so at times checking the bike is security marked is the only way for police to carry out checks there and then on the street and hopefully arrest the thieves and return the bikes to their rightful owners. If you want your bike marked please just contact your local Safer Neighbourhood Team. Contact details of your local team can be found on www.met.police.uk

Richmond Met Police have asked us to share the following with cyclists of the borough who may use GPS computers on their bikes. Note there is an option in Strava which allows you to delete any ride detail a certain distance around your home post code to prevent this happening. We would add also that many thieves rely on simpler methods, namely following cyclists home. Read our previous posting which contains cycle theft prevention advice:

“I have been working on TW borough investigating bikes that have been stolen over the past couple of months or so. As there have been quite a lot of very high value and sometimes specialist custom built bikes being stolen, I have been trying to find a common denominator between them all. Last week I was speaking to one of my friends who is a very serious cyclist and also has several high value bikes himself.

We were talking about the security of bikes and he mentioned that he had previously used a couple of websites www.strava.com and www.garminconnect.com which record the journeys made. As cyclists are quite a competitive bunch they routinely boast online about what type of bikes they have and what that have done to them. The worrying part is that he said the websites log the start and finish points of the routes taken and website users can zoom into the start and finish points which routinely are home addresses for the cyclists. It doesn’t take much to then use google earth and zoom into the house to see if they have a garden shed or garage which is likely to contain the bikes.

My friend is a retired PC so soon saw the risks and deleted his profile from the websites, but I am wondering how many of the high value bikes stolen may have appeared on one of these websites. I have started asking victims if they use these websites as I fear there must be some sort of satellite device used to pinpoint the addresses as it is often only the one house burgled in the street. I would appreciate your opinions as we have recently had a couple of successes getting bikes back to owners and want to try to stop them getting stolen in the first place if possible”

Some extra tips from a local cyclist on things to avoid:
– Using the same nickname on the map sharing route sites as you do on any forums, social networking sites, blogs, ebay etc
– Having your social networking and route mapping accounts open to people other than your friends.  The best way to check what information you are showing is to copy your website address from the account and ask a friend to check it. They’ll probably look for different details than you.
– Posting advertisement with give away clues when selling old bikes ie ‘now have a great new bike so don’t need this one’
–  Having any pages online that show your full name and user ID. It just makes it that much easier to track where you live, especially if you have an unusual name.
– Bragging about your kit and new bling bike on bike threads on forums, and posting pics.
– Listing the details of your bikes on Strava. Just use road1, 2 etc or log bike mileage elsewhere if you need to do it.
– Starting  maps or your Garmin near your house. Mapmyrun, Garmin connect etc don’t allow you to hide the start and end points on maps.
–  Posting your times, race numbers etc on threads just makes it that bit easier to find out who you are in ‘real life.’
– Publishing rides on map sharing sites while you are away.
– Using pics of your new bike bling as your avatar.
– Having bike club and triathlon stickers on your car bumper

A few items of cycling interest.

Bike Theft. – the police reported 506 bikes stolen (from street ?) and 683 “non-residential burglaries (mainly bikes stolen from sheds) for the year so far. The latter is a 7% increase. I did ask whether this usually unlocked sheds – apparently not always.  Expensive bikes are being targeted. One decoy bike was stolen and quickly taken to Westminster. The Borough Commander – CSI Chalk who is himself a regular cyclist – will send on more details and I will add them here.

Sgt Boulton of  Richmond Park Safer Parks Team told me that they had a problem with cyclists not wanting to mar their lightweight bikes with a lock and then leaving them outside a cafe. They will tag bikes on request.

Usual complaints from an individual about cyclists on the footway in Broad Street , Teddington. Why on earth would anyone do that when congestion traffic-calms the road pretty effectively ?

Sadly here in the Borough of Richmond, cycle theft is a continuous threat and we’ve previously reported on the growing number of stolen bikes. While the police continue to offer valuable bike marking schemes and theft advice, here at RCC we’d like to see a more proactive approach targeting the thieves themselves.

This week Richmond resident Colin Lusk shares his personal experiences of theft in the borough. Don’t forget to check out our advice on how to reduce the chances of having your bicycle stolen.

If you’d like the opportunity of a guest spot on our website to write about anything local and cycling related, get in touch. 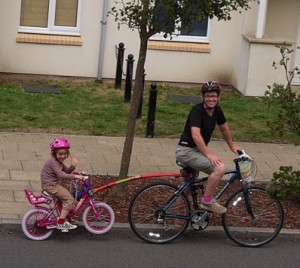 Colin and daughter in happier times

Life sometimes feel like a long series of goodbyes. In my early teens, someone stole my manky old three-speed, leaving me only the remains of the lock to remember it by. The bike was blue and gold, the lock silver and white. Thirty years on, I can still tell you the combination. In my student days, I had a racer, held together by rust, insulating tape and willpower. One day, I thought it would be safe to leave it outside a shop for just a minute. It wasn’t. Then came a series of slightly pricier bikes, stolen in any number of ways, from brute force to low cunning: A lock cut through with heavy-duty tools outside Hounslow East station while I was working nights, and a white hybrid chained to a signpost in Preston and taken by unscrewing the sign from the top and lifting it over. I could go on.

END_OF_DOCUMENT_TOKEN_TO_BE_REPLACED

Police report that on two weekends in August a number of bikes were stolen by breaking into sheds or climbing over fences.

Not everyone can have a naked Nicky Campbell to chase off bike thieves, so following on from the previous campaign by SmarterTravelRichmond, the Met Police in Richmond have launched ’12 Days to Get Cycle Safe’. Between 17th and 28th May, there will be over 30 bike marking events across the borough. See the end of this post for an event near you.

Given our report last year of the 2,296 bikes stolen in the borough between 2007 and 2010, we would encourage everyone to have their bicycle marked to increase the likliehood of having it returned if it is stolen, as well as checking out the advice summarised below:

Here’s a full list of the events planned for this campaign. This has changed a couple of times, so double check the Richmond Met Police Website for any last minute alterations: 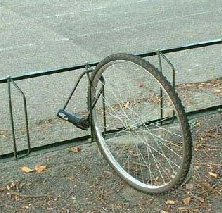 We’re now one event away from the half way point of SmarterTravelRichmond’s ‘Lock it or Lose it’ campaign, launched in reaction to the large number of bike thefts in the borough, and here’s an update from the team on progress so far:

The next event will be on the lower concourse of Richmond Railway station from 4pm on Wednesday 8th December. The remaining five events are listed below and further details on location can be found here – here – Bicycle Theft Reduction Events 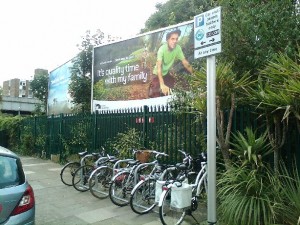 Compare this to Holland where:

There are fourteen railway stations in the Borough of Richmond, each with great potential for increasing the number of people arriving by bicycle. RCC members carried out an audit of all thirteen stations and these audits can be accessed by clicking on the station name in the table below.

Check out your nearest station and the recommendations from the audits. These are live documents so let us know of anything we’ve missed, new issues or things you’d like to see improved at campaign@richmondlcc.co.uk Having accurate information is vital to influence future consultations and any future updgrades of facilities.

RCC would like to see improvements in three areas that would help realise the potential for growth in cycling to stations in the Borough – Security, Provision and Access.

END_OF_DOCUMENT_TOKEN_TO_BE_REPLACED

Following our report earlier this year of the 2,296 bikes stolen in the borough since 2007, SmarterTravelRichmond have launched a six month ‘Lock it or Lose it’ campaign in partnership with the Police Safer Neighbourhood Teams and British Transport Police running from October 2010 to February 2011. The partnership is aiming to reduce cycle theft within the Borough of Richmond, and this will be through Education, Enforcement and Events.

Education
Through the campaign, the team want to reduce the chances of cyclists having their bikes stolen and increase the likelihood of recovery in the following key areas:

London Cycling Campaign’s ‘Beat the Thief Campaign’ provides good advice in all these areas – LCC Cycle Security and see the advice on our earlier post.

Enforcement
The police are placing cycle theft high on their priority list and this includes several key actions:

Events
Ten events have been arranged across the borough from October through to February 2011.  The first, held on 12 October at Twickenham station attracted over 100 participants. At these events there will be: