Apologies if you were at the London Cycling Campaign Annual General Meeting last night and know all this.

The motion endorsing Go Dutch was passed with a majority.

Click here to read the welcome letter from the LCC Chief Executive concentrating on the imminent campaign and here to see the 10 Go Dutch Key Principles printed on the wallet-sized foldout given out at the meeting.

One of the words used by the Chief Executive to describe the campaign was “transformative“, which I take to mean “things will be very different afterwards”.  His letter refers to “3 flagship Go Dutch developments on major streets and/or locations” and during the refeshment break members were invited to comment on displays relating to:

It wasn’t clear whether these are the “3 flagship developments” envisaged.

Bow roundabout was subject of an emergency motion that was passed overwhelmingly: click here to read it and here for the LCC Press Release.  While Bow is a long way from our Borough these very tragic events brings it close because

Richmond Cycling Campaign is writing to London Assembly member Tony ARBOUR asking him to press TfL for immediate remedial work at Bow roundabout and you can to: tony.arbour@london.gov.uk

Here’s the reply from Caroline Pidegeon, Chair of the Transport Committee, London Assembly, to another members e-mail:

“I know that I speak for all Assembly Members when I say that I too am appalled by the tragic deaths of cyclists on London’s roads and am doing all I can to urge the Mayor to improve safety as well as hold him to account over his decisions. To this end, cycle safety in London has been discussed as a priority at several Meetings of the Assembly over the past fortnight.

At the Assembly Plenary on Wednesday 9th November, Assembly Members had the opportunity to question the Mayor in his capacity as Chair of Transport for London. I asked him outright if TfL’s roads are safe for cyclists, and indeed whether he takes cycle safety seriously. You can read the transcript of the meeting here

At Mayor’s Questions yesterday (16th November), I urgently raised this matter once more. As a result, the Mayor has confirmed that TfL are undertaking a review of all of the roundabouts where serious injuries and fatalities have taken place so see what can be done to improve safety. Furthermore, he has agreed to meet with the family of one of the cyclists who was killed at Bow Roundabout. A webcast of Mayor’s Questions can be found on the GLA Website http://www.london.gov.uk/who-runs-london/the-london-assembly/webcasts, my question starts about 10 minutes in.

A written transcript, including responses to written questions tabled by Members, will be made available online next week http://www.london.gov.uk/moderngov/ieListDocuments.aspx?CId=183&MId=4335

Please rest assured that I will continue to press the Mayor on this issue in order to hold him to account over his decisions which will impact on safety for cyclists. I am also keen to continue working alongside the London Cycling Campaign and other cycling groups to raise awareness and campaign for safer roads.”

Click here for the flyer about the Bow Vigil this Friday evening.

With a Cycle Superhighway coming close to us, on the north side of Kew and Hammersmith Bridges, you may be interested to read here what Cyclists in the City say about one in our neighbouring London Borough of Wandsworth.

E-mail your thoughts to:  campaign@richmondlcc.co.uk

On the agenda for the Council’s Cabinet meeting on 24th February was the initial results from the Borough’s All in One Survey conducted towards the end of 2010.

Top of the things that need improving is “Traffic and/or levels of congestion” chosen by 34% of respondents.

7% said cycling is most important to them in making their area a good place to live.

On the face of it the results are pro-car but the problem of congestion highlights the relevance of the work Smarter Travel has done since March 2009.

Their aim was to ease congestion by encouraging an increase in walking, cycling, public transport and car club membership.

A variety of awareness campaigns, travel planning and infrastructure improvements enabled them to meet, or exceed, most of their targets.

With that programme ending on 31st March we are reading how the 2nd Local Implementation Plan and Draft Cycling Strategy will fill the gap.

E-mail campaign@richmondlcc.co.uk with your comments.

So much to talk about after the Cycling Liaison Group [CLG] meeting on Monday 31st January not sure where to begin so I’ll go for “systematic”, working through the agenda in posts to bring clarity rather than confusion, hopefully.

“Thames Towpath Cycle Tracks Order – discussion / feedback from ward councillors on their opinions on promoting shared cycle and pedestrian use on the Thames Towpath.”

I first cycled the towpath when I lived in Hampton and worked in Barnes 25 years ago.  The ride from Chiswick Bridge to Hampton Court and back via Bushy Park is a jewel in the Richmond crown and one reason it’s such a great place to live.  But why is the surface so poor in places yet so good in others?  The Council say it’s a footpath, so can’t be an official cycle route, so isn’t engineered, or maintained, as one.

The Cycle Tracks Orders appear as Scheme 5 in the London Borough of Richmond-upon-Thames [LBRuT] Cycling Capital Budget 2010/2011, allocated £5,000.  £1,800 was spent by December 2010, which is the cost of the time the council officer has worked on it.  Apparently the towpath has been talked about for at least 10 years with money set aside to do something.  I’ll ask how much and for what.

The Scheme intends to:

The draft LBRuT Local Implementation Plan for the next financial year has £50,000 allocated to “Cycle Tracks Act and improvements to surfacing of Thames Towpath“.  Description of the scheme includes “According to progress may be sufficient time / funding to introduce surfacing improvements.”

8 sections are listed between the Borough boundaries towards Putney at one end, Kingston and Hampton Court at the other.  Actually, there are 7 as Teddington Lock to Kingston was dropped after the shared use path was installed.  The 1st 3 sections are continuous, from Putney to Hammersmith Bridge and Chiswick Bridge to Kew Bridge. 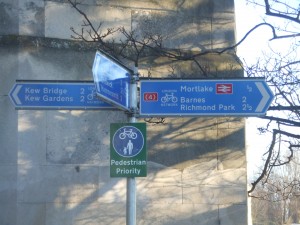 So, this is not a vision of a continuous cycle route along the River Thames from Putney to Hampton Court.  No change to the bumpy bits past Kew Gardens round the bend opposite the London Apprentice in Isleworth, or round Ham to Teddington Lock.  Should there be?  You tell me: campaign@richmondlcc.co.uk.  I’ll go on riding it, as will many others, especially the fully-suspended and mud-streaked.  But is this consistent with the strategic aim of promoting safe family routes by improving greenway routes, including the Thames Towpath?  You tell me: campaign@richmondlcc.co.uk

It’s not all bad news.  The Draft RCC Priority List identifies the towpath between Hammersmith and Chiswick bridges as something to sort out, even with the engineering challenges of a route routinely flooded at Hammersmith Bridge and through Mortlake. 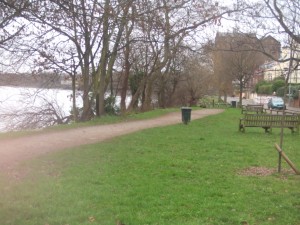 And, despite everything, I didn’t sense any intention on the part of people at the meeting on Monday to affirm footpath status by putting up no cycling signs and enforcing them, I think recognising this would be as expensive and even more problematic than the cycle track orders.  What I did hear were the same complaints as the Tamsin trail in Richmond Park, used as the example of what happens on shared paths: speeding cyclists frightening pedestrians, running over young children, dogs and elderly ladies.

So, what now?  The Chair put it over to the next meeting of the CLG in April while all the relevant councillors are contacted for their view.  In the meantime I’ll ask the cycling officers some more questions, hopefully some of which will be yours.  Watch this space.

Given all the work associated with the RCC Manifesto for the General Election in May I think it’s a good place to start writing an action plan for the coming year, in fact why not the next 3 years?  But why should RCC have an action plan?  As I said in my previous post, about local authority spending on cycling, there’s a lot of stuff planned we should be involved in so we need to plan our time and effort.  We also need to establish our priorities, particularly in relation to cycle journeys, in order to influence the programming of work and ensure accountability for timescales and deadlines.  I’ll talk about priorities in more detail in my next post about the Cycling Liaison Group [CLG] Scheme Priority List but in the meantime knowing what we want to achieve over the next 12, 24 and 36 months will allow us to judge if it got done and if not, why not.

To begin with I’ve taken the Manifesto’s 10 points and sketched out a series based on an aspiration, a strategic aim,  2 strategic and what turns out to be 16 operational objectives.  These are grouped under the headings:

It’s a work in progress but have a look and see what you think:  Manifesto Action Plan v1 13122010 At this stage there are no priorities with all objectives of equal importance.  As we move through the action planning process we will need to think about importance and I’ll talk about priorities in my next post.

This Thursday, 6th May, marks polling day in the Local and Parliamentary here in the Borough of Richmond. By all accounts, here is one of  your greatest opportunities to influence the approach to cycling in your local area and according to the Evening Standard,  “Cyclists Could Hold the Balance of Power at Election“. At RCC, we put together a Cycling Manifesto for Richmond, and earlier this month we sent it out to all the candidates in the main parties. These manifestos are being used throughout London in the different LCC Local Groups.

First off, we have to state that RCC has no political affiliations to any of the parties and takes no position in support of any party or candidate. Whatever your political opinion though, please vote.  Please make sure those around you vote. Universal suffrage wasn’t achieved in this country until 1928 – here is one story of what people went through to achieve it…
http://en.wikipedia.org/wiki/Lilian_Lenton.

We can’t stress enough that the make up of the council has a big impact on cycling in the local area, both positive and negative. END_OF_DOCUMENT_TOKEN_TO_BE_REPLACED

The RCC Election manifestos are now on their way to the candidates in the local and parliamentary elections in the borough of Richmond. Many thanks to everyone for their input and help in getting these ready.

We shall report back the responses from the candidates (we’ve already had some back from some quick off the mark candidates) in an Election Special Newsletter before election day.

Meanwhile, there is an article in the Guardian blog today talking about General Election Cyclist Pledges.  Some of them make interesting reading to say the least…

Here are the accompanying letters (and manifesto):

Manifesto and Letter to Cllrs – Election 2010

Manifesto and Letter to MPs – Election 2010

Please feel free to adapt our letters and send them to your prospective candidates.