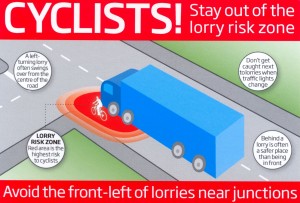 Lorries can be a big danger to cyclists if cyclists aren’t aware of the risks and if the drivers of large vehicles are not well trained or ignorant of how vulnerable cyclists are.  The majority of cyclist fatalities in London are caused by large vehicles.  Statistics for cyclist incidents can be found here.  You can find guidelines on how to try to minimise danger to yourself around lorries here.

Below is the letter I recently sent to Richmond Council regarding the Safer Lorries Campaign:

Further to your response of January 4th sent on your behalf by Liz Swabey, and also looking at the borough’s website I am pleased to see that the council is taking an interest in working to improve lorry safety for its contracted lorries and its own fleet.

However, as you can see from the London Cycling Campaign’s map, which you have also posted on the borough website, Richmond remains one of the few London boroughs that has not shown sufficient commitment to making its lorries safer.http://lcc.org.uk/pages/safer-lorries-safer-cycling

•  An assurance that the Council and your contractors will be putting your drivers through the ‘Safer Urban Driving’ module available through TfL FORS.

•  An assurance that the Borough, in addition to your contractors, has signed up to TfL FORS and will progress through the grading. You are not currently on the FORS members list – could you advise whether this is in progress?
http://www.fors-online.org.uk/index.php?page=P_MEMBERS_LIST&return=P_WHO_INTRO

•  An assurance that Veolia’s vehicles will meet the standard for safety equipment.

To assist in the assessment of the safety of your lorries, both council and contractor operator, LCC have worked up a questions and answers document in discussion with other boroughs to explain the requirements for lorries and training in more detail. Please follow the link http://lcc.org.uk/uploads/5203

If you have, as indicated, signed up as a council to FORS in addition to your contractors then LCC can move Richmond borough off red into yellow on the map. Similarly if there is a commitment to do the ‘Safer Urban Driving’ CPC module you will get enough extra points to move into yellow. This module is an economical way to raise driving standards since doing CPC’s modules is now mandatory, as well as being subsidised by TfL, so it makes sense to get drivers to do this module first.

If you make the next step and commit to including those standards for all future contracts then LCC could give you green status even without signing the pledge.

Since the Mayor is making future cycle funding for individual boroughs dependant on evidence that they are working towards ensuring safer lorries there is an extra incentive for Richmond to push this forward.

I look forward to hearing from you.

And this is their response:

I have been forwarded a copy of your email to Cllr Harrison regarding ‘Safer Lorries in Richmond’ and he has asked me to respond on his behalf.

In addressing the points you raise we are indeed aware of what the London Cycle Campaign have written on their web site and are disappointed that they have taken the approach they have done. In response to requests we have furnished the RCC/LCC with confirmation that the Council as well as its contractors are committed to migrating their vehicles to ones that are fitted with ‘cycle alert/safety devices’. Indeed my department has recently placed an order (and should soon be delivered) for replacement gritting vehicles all fitted with the safety devices and as any other lorry is replaced we will be doing the same. We had hoped that the LCC would work in harmony with the Council, rather than continue to adopt the approach they have done, as we feel this would be more beneficial.

I am grateful for the link to the TfL ‘Safer Urban Driving’ module and while we have only a small number of drivers this appears to be a worthwhile course and it has been brought to the attention of the Head of Service that has the drivers. I would point out, and again seems to be something not being recognised by LCC/RCC at the moment, that unlike many organisation we have also taken the stance that the Driver CPC training should be extended to those drivers using council vehicles even if they are exempt under the legislation. This ‘over requirement’ has now been written into our latest Policy document on Health & Safety.

With respect to the TfL FORS scheme while we are certainly not opposed (indeed are supportive of raising standards) to the scheme there must be recognition that in fact the Council is not a fleet operator in what we understand the scheme to be primarily designed for. Indeed none of our drivers/vehicles actually fall within the scope of even needing to have tachometer recording; we are currently looking into whether the FORS Associate offered by TfL is in fact the appropriate level.

I am not clear on your comment regarding Veolia’s vehicles, as you know Veolia are already a FORS member. Some of their vehicles are supplied by ourselves and we have already committed to migrating to the latest safety equipped vehicles as be make new purchases. However, you may not be aware that the Veolia contract is shortly due to be retendered/let and therefore it would not make sense to buy new refuse lorries at this point in time. Indeed even if I could place an advert/order today at best any new lorry would only be in use for a few weeks.

I trust this helps you understand the situation and as I have indicated we are disappointed that LCC are taking the approach they are but that is a matter for yourself and your colleagues.

London Borough of Richmond Upon Thames