Not for the first time Barnes Common was discussed at the Cycling Liaison Group The minutes say:

“A Public Inquiry held in year 2000 found in the Council’s favour regarding the widening of existing paths across Barnes Common (Public Rights of Way FP10&16) under the Greater London Parks & Open Spaces Act 1967. However, they still require conversion using the Cycle Tracks Act before the paths can be widened and cycling formally allowed along them. If there were objections to the Cycle Tracks Act this could potentially lead to another Public Inquiry. The Cabinet Member has instructed officers to undertake a feasibility study in 2011-12 to consider several alternative options that may be easier to introduce than the previously agreed alignment across the middle of the Common.”

A map of part of Barnes Common was handed out with various routes shown in different colours. You may remember a scheme in last year’s plan to cross the Common on the Putney side of Rocks Lane that was dropped after oppostion from the Conservators and the money returned to TfL. This time it’s the Barnes side and while RCC wants to look at the whole Common we welcome an opportunity to sort out difficult bits on the existing route [black line on the map] that are not safe or convenient, like the requirement to dismount at the end of Laurel Road 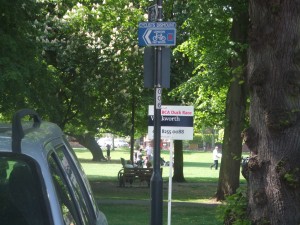 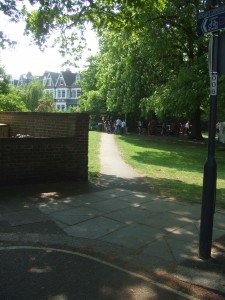 the narrow bridge over Beverley Brook 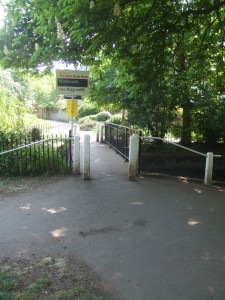 the dangerous right turn out of Cedars Road on to Mill Hill Road and the double level crossing in Vine Road. Proposed options include:

“widening of the footway on west side of Rocks Lane and designation to shared cycle and pedestrian use [thin red line] This would include the provision of a Toucan crossing at Mill Hill Road/Rocks Lane junction (West side);

north east-south west route across Barnes Common between the existing Rocks Lane/Ranelagh Avenue Toucan crossing and the Mill Hill Road/Cedars Road junction [blue line] This would require an informal crossing point of Mill Hill Road before continuing across the Common to the junction of Station Road/Vine Road. It would also require conversion of existing public rights of way footpaths being converted using the Cycle Tracks Act.”

The options don’t deal with crossing the railway so we propose: 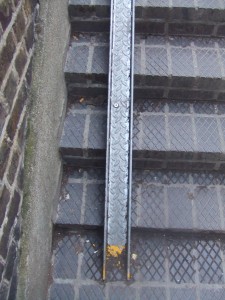 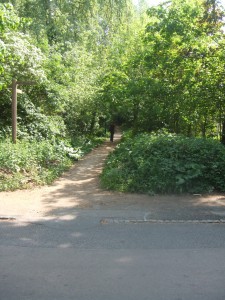 and/or the junction with Upper Richmond Road where the existing path is already 1.5 metres wide and links to Priory Road and Richmond Park, a key route for visitors to the Olympic Road Race in 2012.

The RCC Priority List identifies barriers to the cycle journey from Richmond to Putney through Barnes and these proposals provide some alternatives.

Share your thoughts on cycling through Barnes and the proposed options campaign@richmondlcc.co.uk