It’s beginning to look like the Twickenham Plan is now going to have many more improvements than we’d previously thought, to support people who want to cycle in the area. (If you want to see where we’ve been, you can check out our last post on the subject here.)

Last week, representatives from Richmond Cycling Campaign met officials from the planning department to look at their revised ideas for the new Twickenham (or “West Richmond“, as it might be….) (Full minutes of the meeting – PDF) This was a follow up to our last meeting in November.

And although Twickenham isn’t going to be a Dutch style cycling paradise, we think that what has been described to us is a radical departure from the first set of plans we saw. (For a great suggestion for what Twickenham could really look like, check out the ideas that Paul, one local father has been looking at.)

Some of the highlights

Perhaps most importantly, Twickenham was accepted to be a ‘major project’ in TfL terms. This means that we can expect it to fall into this statement in the latest ‘Vision for Cycling‘

.. we will closely monitor all major new planning applications, schemes and developments, such as Earl’s Court and Nine Elms, to promote meaningful pro-bike content and discourage antibike content.

Which means that we can hopefully rely on TfL to refuse to pay for this, unless they’re satisfied that being able to access the area safely by bicycle is a key element of the project.

King Street (from Cross Deep to the London Road junction) will get 2m-wide cycle lanes beside a single 5m wide general traffic lane each way. In off peak hours – i.e. most of the day – this means you’ll be able to cycle quietly and confidently all the way along here. To complement this, the planners are aiming to make the Holly Road section bi-directional for cyclists, so that anyone going from Heath Road to London Road will not need to use the junction of doom (London Rd/King St/York St).

A really important point about these lanes on King Street is that, although they won’t be mandatory lanes, the engineers are looking at ways to remove any chance of the conflict that cycling struggles with in other parts of the borough. As well as clear marking of the whole surface, they’re looking at some form of defined edge – such as the cat eye strips seen in the mayor’s new cycling vision – to really delineate the space.

[osm_map lat=”51.449″ long=”-0.33″ zoom=”17″ width=”300″ height=”225″ map_border=”thin solid blue” theme=”ol” type=”Mapnik”]
London Road will have at least 1.5m of cycle lane along all of its length, although it looks like there’s still some design and thinking to be done at the fateful junction with King Street, because of the ongoing requirements to be able to get enough traffic through there, especially to allow buses to move smoothly.

[osm_map lat=”51.445″ long=”-0.33″ zoom=”18″ width=”300″ height=”225″ map_border=”thin solid blue” theme=”ol” type=”Mapnik”]
At the Cross Deep junction, they’re looking at including a new design for traffic lights which will give cyclists a head start, in an attempt to lower the level of conflict between transport modes (i.e. cars v. bicycles, bicycles v. pedestrians, etc.) This design is currently in testing at the Transport Research Laboratory, so we’ll need to wait on the results before we find out whether they’ll go ahead.

Also, the Cross Deep junction will apparently feature two 3m wide ‘general’ lanes, with a 2m wide cycle lane. This will ensure that anyone choosing to cycle on these sections will always be able to easily make their way to a safer position at the front of queuing traffic.

Not too much change here, partly because there’s no definite plan as to where all the cycle parking will go. There was some discussion around placing parking in the middle of King Street, like in Kensington High Street. 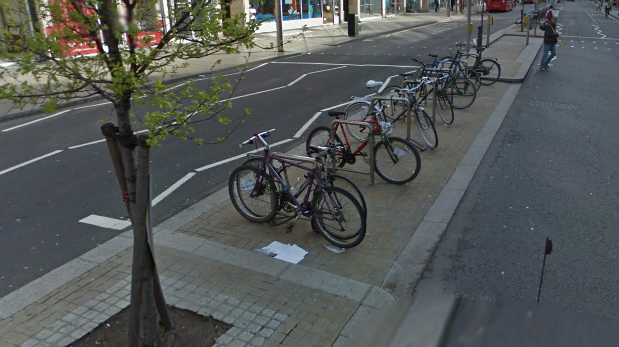 Obviously this wouldn’t be the only way to park, but it’s under consideration as an option. The removal of large sections of railing will also make a significant difference to the volume of cycle parking available in Twickenham, so if you have any strong opinions on where you think we should be parking, please tell us, and we’ll make sure it’s fed back to the council.

The removal will extend over almost every metre of railing present in Twickenham, including London Road and all the way to the station, which is going to be a huge improvement to the urban realm in the area, meaning you’ll be able to stop off more easily, and pedestrians will be able to cross at a point of their choosing, rather than being penned in to specific crossing points.

While we were there, we discussed some interesting background with the engineers. For example, they’ve surveyed the car parking provided in Twickenham, and they know that the main car parks have spare capacity at peak times.

They also discussed the impact that TfL requirements were having on planning and, interestingly for us, these seem very focussed on making sure buses can get through, which means that there’s a real change in direction from the ‘smoothing traffic flow‘ that has been a TfL stalwart for quite a while now.

Finally, it sounds like traffic volumes in Twickenham have been falling for a while now – we’ll try to get the figures for this, but it’ll make interesting reading, when considered against the plans for how traffic flows through the town centre.

One thought on “Twickenham could be great for cycling.”