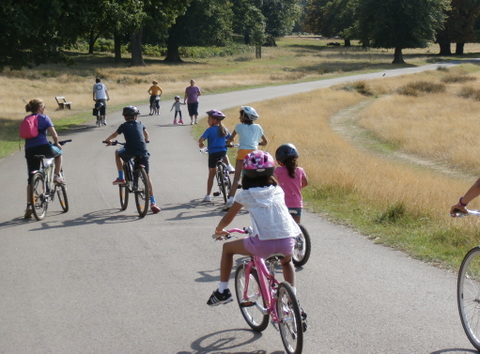 (Image by “The Cycling Dutchman”) http://thecyclingdutchman.blogspot.co.uk/2013/09/london-by-bike-in-three-days-east-west.html

Thank you for organising the meeting about Richmond Park, before Christmas. Richmond Cycling Campaign is really keen to help make the park a great place for everyone, so we’d like to share some thoughts and feedback.

The park is for everyone

This was a big theme at the meeting, although there seemed to be some element of consensus that Richmond Park is not merely a through-route for people moving around different parts of the borough. But we’d like to emphasise something else, here. Perhaps because the most visible cycling in the park is club or competitive or sport cycling, little thought was given to other forms of cycling. Whenever you talk to the Royal Parks, or indeed your working group, we’d like to remind you that not only is there an off-road trail which is consistent source of conflict, but that the park also needs to be accessible to everyone on a bike. This means that children need to be able to ride round, as does anyone else who is powering themselves – handcycles, trikes, people with shopping, etc.

Much was made by some panelists about having a code of conduct for park users, and indeed there’s one that was circulated at the meeting. Aside from the basic point that there’s already a perfectly usable set of legislation to govern use of the park, we would be concerned about issuing a code of conduct unless strenuous efforts were made to ensure that it is circulated to all users in the park, and not just those on cycles.

Some Data would be good

As Andrew Gilligan and a number of people observed, the whole conversation needs some actual data. The only data we’ve seen – the STATS19 data, and the Friends’ traffic survey – show that cycling is the most vulnerable thing to do in the park, yet can also provide a very significant majority of traffic at some points during the week. Unfortunately, as Gilligan also noted, cycling attracts a large volume of complaints despite causing virtually no danger to cars, and significantly less danger to pedestrians. We aren’t arguing for cycling to be treated differently, but just to be treated fairly.

In the last few years, New York has been very successful with ‘trying things out’ – using low cost trials which can be easily reversed. Recently, the borough of Camden has done the same. The outcome of these experiments is that for small investments, it is possible to get a good idea of what possible solutions might actually work. We think the same could be done in Richmond Park – your advisory panel could consider simple, limited ideas which run for a short period, in order to establish what longer term solutions could be good for the park.

Finally, cycling needs to be safe, and feel safe

Our biggest message though, is that thousands of people in the borough don’t cycle or cycle rarely, because they don’t think it’s safe to do so. And the Space for Cycling guidelines – which echo best Dutch practice – make it very clear that Richmond Park’s roads are simply not of a sufficient standard to make getting on a bicycle of any type an attractive option for many of the people who should – by rights – see the park as a great place to visit by bike, or to use as a safe way to get from Richmond to Kingston, Roehampton, etc. So if you believe that cycling is a good thing which benefits not just those who cycle but society generally – as we do – then you’ll support the Royal Parks in trying to make Richmond Park a place for everyone.

We welcome the opportunity to engage with your working group on the Park.