Back on the 1st of July, RCC and a number of other interested parties received draft copies of LBRUT’s “mini-holland” bid – and were given 48 hours to review it!.  We duly scrambled some thoughts together and fed them back to LBRUT – read on for a summary of our key points and concerns with the bid.

What is “mini Holland” all about then?  As part of the Mayor’s vision for cycling, all outer London boroughs can bid for a pot of money to spend on “transformational” investments in cycling.  Up to 4 will be selected for “very high spending concentrated on a relatively small area for a genuinely transformational impact.  The aim is that the successful boroughs will become every bit as cycle-friendly as their Dutch equivalents … and…  to replace the thousands of short local journeys by car that could easily be cycled instead.” The Mayor’s press release finishes with “We are looking for radicalism, imagination, and political commitment to genuinely substantial change.”

The bids will be evaluated over the summer; and up to 8 boroughs will taken through a round of further bid development in September/October before the final schemes are chosen.  It’s important to note that mini-holland isn’t the only source of money from the Mayor/TFL and unsuccessful boroughs “may still be eligible for funding under different programmes for aspects of their proposals which interest the Mayor’s team”.

So although for now the bid is a fait accompli, it’s worth considering what we would want to see improved if goes to the next stage – or if these initiatives resurface in other forms.

The LBRUT Bid in a Nutshell:   Overall, whilst the bid is full of positive rhetoric, it boils down to a collection of separate projects and measures, which fall a long way short from making the area “as cycle-friendly as their Dutch equivalent”.  Some of the ideas are very good, and others appear misguided.  In particular, the bid is striking in what it does not address – there is very little in here to tackle the basic need for safe direct and convenient routes to schools, shops and town centre areas that characterise the Dutch approach.  The preamble summarises the present disconnected facilities quite well, but but instead of a commitment to join them all up, the document proposes a few more (expensive) disconnected facilities.  We think the bid needs significant rework if it is to genuinely meet the aim to “replace thousands of short local journeys by car that could easily be cycled instead”.  The bid also ducks the difficult questions –neatly avoiding any proposals that would involve re-allocation of road space away from motor traffic to cycling – so it’s hard to see how it ticks the boxes for “radicalism, imagination, and political commitment to genuinely substantial change”. 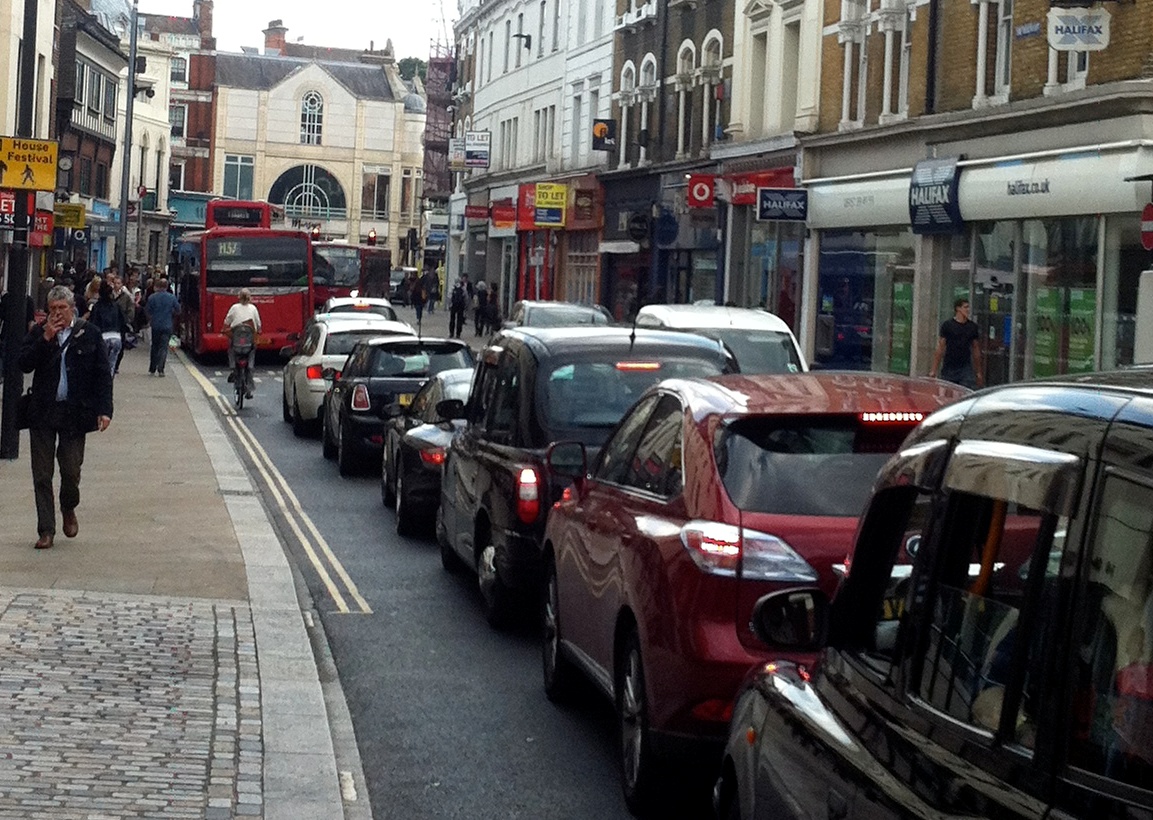 Cycling in Town Centre Traffic - How Would the Bid Improve This Experience?

The Proposals:  Firstly, it’s important to note that the bid is centred on Twickenham, and is positioned as a set of further improvements above and beyond the current Twickenham plans – coupled with a number of measures that go much wider than Twickenham.  These are discussed below.

Twickenham-Ham Bridge.  A new pedestrian-cycle bridge to connect Twickenham town centre with Ham Lands – starting on the north bank at one of (a) Marble Hill park (b) White Swan PH (c) Twickenham Embankment (d) Radnor Gardens.
Our view:  This has a high price tag that could be better spent on improvements to town centres; nevertheless it would provide a good quiet north-south route from Twickenham to Richmond Park and Kingston town centre; plus it would provide Ham residents with easy access to the Twickenham shops and amenities.  The bridge would need to land near the White Swan/Twickenham Embankment if it is to divert cyclists off Cross Deep (which is unpleasant to use) and not be too close to the existing bridge at Teddington Lock.

Twickenham Town Centre:  Segregated Track on London Road & Twickenham Super-Hub.  LBRuT is proposing to install a “Danish-esque” cycle track along London Rd northern section from the junction with Whitton Road down to Railway Approach; and turn Twickenham Station into a “Super-Hub” with 450 parking spaces.
Our View:  What is a “Danish-esque” cycle track? We think this means a dedicated lane with a half-height kerb between the pavement and the road.  This has already been done in the UK at Old Shoreham Road in Brighton – which cost £720k for a much longer stretch than proposed by LBRUT here.  What is a “Super-Hub”?  We think this means a lot of secure cycle parking.  Both of these are welcome measures, but hardly radical.  Taking both the station and Ham footbridge concepts together, do we think lots of people from Ham would start cycling to Twickenham to catch the train into London?  Well for Ham residents, Richmond is a zone nearer, and offers the District Line as well and is only 20mins by bike already from Ham; so the jury is out on that.
Most disappointingly, the bid fails to offer any improvements on the existing Twickenham town centre designs;  which still appear to consist of a few lines of paint interrupted by parking bays.

Commuter Routes to Central London: A316.  The bid proposes upgrades to the existing A316 cycle track, including a footbridge to Twickenham stadium, Toucan crossings at Chalkers Corner, and “replacement of several (at least 5) existing roundabouts with Dutch-style roundabouts to improve the permeability at key junctions”.
Our View:   RCC has long campaigned on the issues with the A316 cycletrack – many of them are logged on cyclescape here; and we would be really happy to see these addressed.  However, the A316 is car driver’s route – it is a bypass.  For commuters, it is not a very direct route into London (A205 / Putney Bridge is faster); and for local trips the A316 avoids most of the places people want to cycle to – our local town centres.  We are really concerned that investing in up to 5 Dutch style roundabouts on the A316 would be a large waste of money.  The style of roundabout depicted is not of a suitable design for the A316, the Dutch only use this style on low/medium volume roads not major through routes and only on single lane (1×1) roads.  It looks like someone has been drinking too much Dutch kool-aid without doing any actual research.  The bid would be better off simply saying “we want Dutch best practice junctions” and working through the detail in subsequent rounds.
The bridge to Twickenham Stadium is a good concept but would be far better as an underpass.  An underpass can be wider removing conflict points, and only needs to go down 8 feet while a bridge needs to go up 20 feet (none of the foot bridges over the A316 are cycle friendly). Obviously a bridge is cheaper however.

Commuter Routes to Central London: Quiet Route to CS8.  The bid proposes a new quiet route from Chalker’s corner through Mortlake and Sheen, to link up with Cycle Superhighway 8 (in Wandsworth), including demolition and rebuild of a bridge over the railway linking North Worple Way / South Worple Way.
Our View:  Cyclists want safe direct and convenient routes.  The direct way to central London from Twickenham / Richmond / Sheen is via Sheen Road / Upper Richmond Road West (A205) and then up to Hammersmith Bridge (for Kensington and Shepherds Bush) or Putney Bridge/Kings Road (for West End and the City) .  This is borne out by our analysis of cycle traffic stats from the DFT’s on road counters here.  We think few cyclists from Richmond head for CS8.
The quiet route through Mortlake / Sheen largely exists already as LCN37; and it would be good to link this to the A316; but the proposed route is via a dogleg that re-enforces the feeling that this bid is based on old-school thinking – that we can route cyclists all round the houses rather than tackle the difficult problems – which in this case would be Lower Richmond Road or Clifford Avenue.
Making railway bridges cycle friendly is a great idea; but the bid seems to choose a most obscure bridge for an upgrade.  Upgrades to the bridges at Mortlake station and St Mary’s Grove would have far more benefit.

River Crane Quietway: Twickenham – Heathrow.  The bid proposes upgrades to the River Crane corridor route, with a long term aspiration to link up with routes in Hounslow through to Heathrow, for those that work there.
Our View:  This is a welcome proposal, that needs to be carefully executed in order to preserve the character of the natural environment along that route.  We hope that LBRUT will seek engage with RCC and the Friends of River Crane Environment (FORCE) to work through the details and ensure any pedestrian /cycle conflict is minimised.

Railside Cycling Routes.   LBRUT is proposing to install new segregated cycle tracks which will run alongside the two main railway lines in the Borough which run through Hampton and Teddington, and also alongside the line between Whitton and the A316.
Our View:  This is a great concept – but doesn’t look like much work has gone to validate it’s feasibility with Network Rail and others yet.

Complementary Measures.  This section summarises a whole series of other measures – including cycle parking, monitoring, safer streets, safer HGVs, cycle to school partnerships, greenspace access, improvements to towpaths, better bridges and better junctions.
Our View:  In many ways this is the most promising area of the bid, since it signals an intent to sort out a number of the issues that frustrate and discourage cycling in the borough.  However it is short on detail, and we would argue that many of these should be being progressed as part of the council’s “business as usual”.  Good points: widening the bridges on Hanworth and Nelson Roads would be excellent; as would upgrades to the towpaths.  Could do better: the council does not need to setup special cycle to school partnerships – which sound like more talking shops – to improve the school run.  They need look no further than the existing School Travel Plans for each of the local schools – that they already have access to.  These list out the key infrastructure and area changes which would get more people cycling there.