Both Richmond Park and Bushy Parks should be havens for considerate cycling by all, yet the Royal Parks seem able to fix neither of them.

The latest mess involves Duke’s Head Passage in Bushy Park, where the Royal Parks appear to have decided without consultation that it should no longer be possible to ride along it. 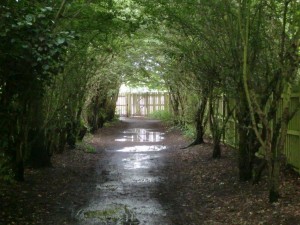 Image by Jonathan Cardy via Wikimedia

You can see what the ride is like, courtesy of this simple video from one of our members. It clearly shows him proceeding happily down the path, and able to interact with dog walkers, children and other users.

Yet the Royal Parks, in correspondence with other members tell us:

“Our highlighted notification of the Regulations (… that have always been present though not enforced as the cause was previously not great enough) is done to carry out our responsibility serving everyone best.”

“No one is excluded from using the route. Walking a cycle for about ten minutes at the very most and keeping a dog on a lead are very small compromises …”

You can see other comments on the changes on the Richmond and Twickenham Times article and the Hampton Ning, and local MP Tania Matthias has weighed in, too, apparently very supportive of banning cycling here.

It’s probably no surprise that Richmond Cycling Campaign isn’t happy about another route for cycling being blocked, and it’s also no surprise that the changes seem to be being largely ignored by users of the route. We’ve already been contacted by a number of members. Things they’ve said include:

“I can now only walk with two sticks because of a back problem [a friend] has a blue badge and can definitely not walk that far… we can both cycle pain-free for 6-10 miles and enjoy getting our fresh air and exercise that way.”

“I have cycled along this passage hundreds of times since 1967, and it has been part of cycle route 168 ever since we started putting safe cycle routes on maps.”

“Dukes Head Passage is a very important and safe cycle route between Teddington and Hampton, used by commuters and school pupils during the week … ”

“I have cycled in the passage for years to get into the park or to ride to Kingston. I cycle with care and consideration towards other users. In my experience, cyclists, dog walkers and runners have got along quite happily without this enforcement. Clearly there must have been ‘an incident’ but I am sure this was an exception rather than the rule. In fact the only raised voices I have ever heard was after the signs went up – and that was people complaining to each other of the unreasonableness of the enforcement! Are we to expect regular police patrols in this leafy little passage? What a waste of resources!”

“Before the ban I cycled with my 6 year old from Ham to Hampton Pool, and also to friends in Hampton. For a child, this extra walking distance makes a real difference. Even for adults this move does the opposite of making cycling a travel choice that is comfortable and easy.”

We’d like to see these signs removed, and the path made suitable for all users – clearly narrower paths like this require pedestrian priority, and we actively support this, but pedestrian priority does not mean making it useless for others.

If you feel like us about this, then write to the local MP, or to the Park manager, or local councillor Gareth Roberts. Feel free to copy us in (info@richmondlcc.co.uk) or drop us a line and we will collate all the responses.

One thought on “Bushy Park – Will Common Sense Prevail?”